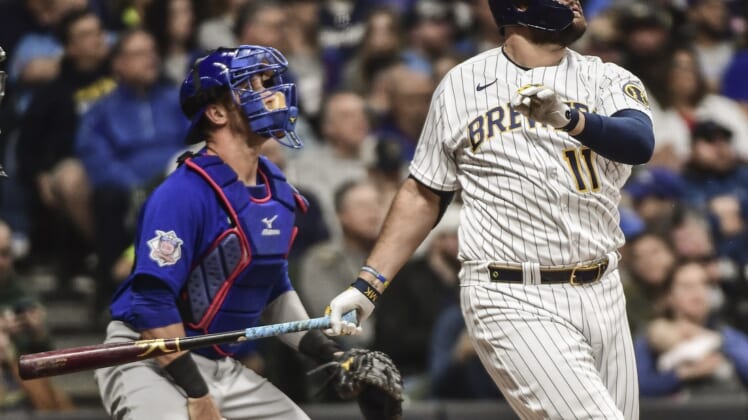 Eric Lauer struck out 11 over seven innings, and Christian Yelich and Hunter Renfroe each homered as the Milwaukee Brewers rolled to a fifth straight victory, 9-1 over the visiting Chicago Cubs on Saturday night.

Renfroe, who homered twice Friday, went back-to-back with Yelich during a three-run eighth for the Brewers, who have pounded out 25 hits in the last two games and outscored their opponents 38-13 over the last five.

After striking out a career-high 13 at Philadelphia last Sunday, Lauer (2-0) was stellar once again for Milwaukee, a winner in 11 of its last 13 games. The left-hander allowed Yan Gomes’ homer in the second and four other hits while recording double-digit strikeouts in consecutive starts for the first time during his five-year career.

Meanwhile, Chicago has dropped nine of 11 following a 6-4 start and been held to a run each of its last three games, all losses.

The Cubs’ Willson Contreras and Patrick Wisdom each had two hits, and starter Justin Steele (1-3) allowed three of his four runs in the first inning, but just two were earned. Steele allowed seven hits in 3 1/3 innings.

After Lauer struck out the side in the first, a throwing error from Wisdom and an outfield bobble by center-fielder Michael Hermosillo on Yelich’s single put Milwaukee runners on second and third in the bottom half of the frame.

Back-to-back RBI hits from Renfroe and Keston Hiura gave Milwaukee a 2-0 lead. Then after the Brewers won a replay challenge on Lorenzo Cain’s initial double-play ball, Tellez followed with a run-scoring single.

Tellez belted a two-run drive off the center-field hitting background in the fifth for the Brewers, who have won 21 of the last 29 home games against the Cubs.

The teams each struck out 15 times.