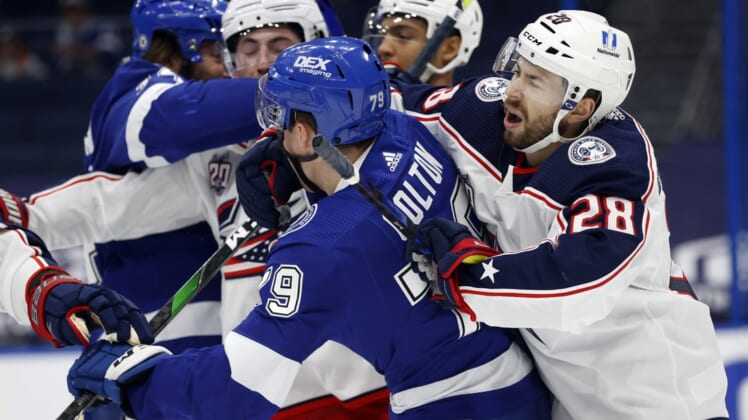 Brayden Point’s second goal of the game late in the third quarter lifted the Tampa Bay Lightning to a 3-2 comeback win over the visiting Columbus Blue Jackets on Thursday.

After Lightning rookie Ross Colton tied the game at 2-2 with his third tally of the season at 14:49 of the third, Point skated in from the left and tried a pass across the goal mouth. But the puck clipped the stick of sliding Columbus defender David Savard and went in at 15:54 for the game winner.

After getting the night off in Tuesday’s series opener, Andrei Vasilevskiy was back in the crease and yielded two goals on 38 shots to go to 22-5-1.

The victory snapped the Lightning’s season-worst three-game losing streak and gave them their NHL-leading 25th win.

Eric Robinson and Zach Werenski notched a goal and an assist each, and Max Domi recorded two assists for Columbus, which dropped to 1-4-1 in its last six. Elvis Merzlikins stopped 31 of 34 shots.

On a five-on-three power play late in the first period after Columbus had too many men on the ice, the Lightning broke through at 15:45 against the Blue Jackets, who had killed off 11 straight man advantages over the previous six games.

Steven Stamkos’ pass below the left circle ended with Point banking in a sharp-angle shot off Merzlikins’ body for a 1-0 lead. It was Point’s 14th goal of the season and first in the last five games.

In the second frame, Vasilevskiy made a pair of saves around his net as the Blue Jackets put the pressure on the Russian goalie. However, Werenski flipped the second round in on a backhander in for his fifth tally at 9:04 to even the game at 1-1.

Columbus controlled most of the territorial play for the remainder of the second, but Vasilevskiy made 14 saves and allowed just the one goal. Point nearly had his second marker inside the final minute, but his one-timer from the slot rang flush off the post.

Midway through the third, Domi grabbed a loose puck in the defensive end and zipped a pass to Robinson down the left side. The speedy winger dashed around Lightning defenseman Cal Foote and roofed his fifth goal over Vasilevskiy at 10:54.