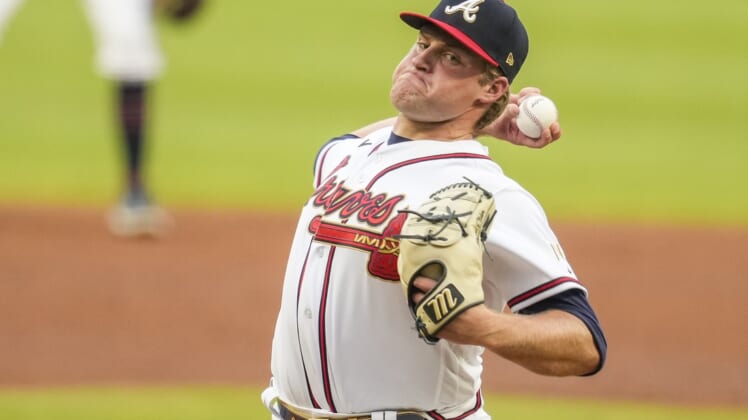 Elder, Atlanta’s fifth-round draft pick in 2020, allowed three runs on six hits and struck out four. The right-hander (1-0) gave up a run in the first inning and then retired 12 straight batters.

Darren O’Day got the final out of the sixth inning.

Jackson Stephens, recalled by the Braves on Tuesday, pitched the final three innings. He struck out four and earned his first career save. He had not pitched in the major leagues in four years.

Ozuna led the Atlanta offense by going 3-for-6 with a double and two RBIs and scoring three runs. It was his first multi-homer game since Sept. 22, 2020, when the Braves clinched the NL East with an 11-1 win over Miami.

On Tuesday, the Braves scored a season-high 16 runs on 19 hits — three by Ozuna, Travis d’Arnaud, Adam Duvall and Ozzie Albies. The latter hit a solo homer in the eighth off position player Dee Strange-Gordon.

The Braves scored in six of their eight offensive innings and tacked on three runs against Strange-Gordon.

The losing pitcher was Patrick Corbin (0-2), who gave up six runs on nine hits and three walks and struck out three in 2 2/3 innings.

Washington DH Nelson Cruz was a late scratch. There was no reason given for the change; Cruz had been on the field during afternoon workouts and took batting practice.