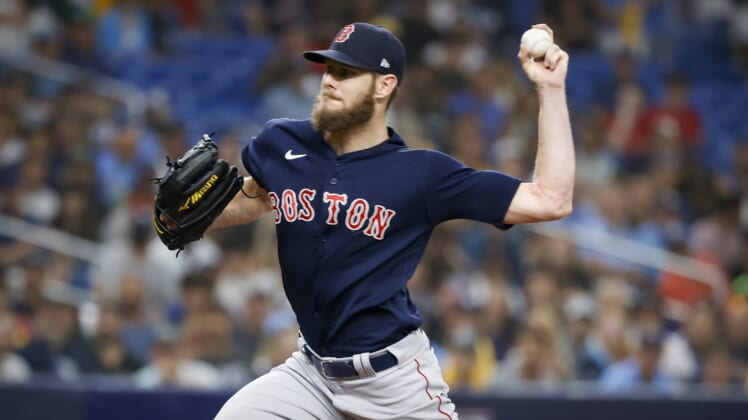 The Boston Red Sox named left-hander Chris Sale as the starting pitcher for Friday night’s opener of the American League Championship Series against the Houston Astros.

Right-hander Nathan Eovaldi gets the ball in Game 2 on Saturday. Both games are in Houston.

Sale went 5-1 with a 3.16 ERA in nine starts this season. He returned in August for the first time in nearly two years after undergoing Tommy John surgery in March 2020. Sale struggled in Game 2 of the AL Division Series against Tampa Bay, however, giving up five runs in just one inning.

He also gave up two runs in 2 1/3 innings against Washington in his final regular-season start on Oct. 3.

“This says a lot about him and his trust in me,” Sale said about manager Alex Cora. “I don’t take that lightly. There’s no hiding from it, there’s no secret. I’ve been absolutely horrible, probably the two worst starts of my career back-to-back leading up to this.”

Cora has no worries.

“I don’t expect him to come out in the first inning. I expect him to go out there and pitch a good game and give us a chance to win,” Cora said.

Eovaldi has a win and a no-decision in his two postseason starts. He allowed just one run in Boston’s wild-card win over the New York Yankees. He gave up two runs in 5.0 innings against the Rays in the ALDS but didn’t figure in the decision. He struck out eight in each start.

Valdez got roughed up in his only postseason start. He allowed four runs in 4 1/3 innings against the Chicago White Sox, getting the no-decision as the Astros went on to win Game 2, 9-4.

Garcia brings a 16.88 postseason ERA into his start after allowing five runs in 2 2/3 innings against the White Sox in Game 3. He also pulled a no-decision in that contest, won by the White Sox 12-6.