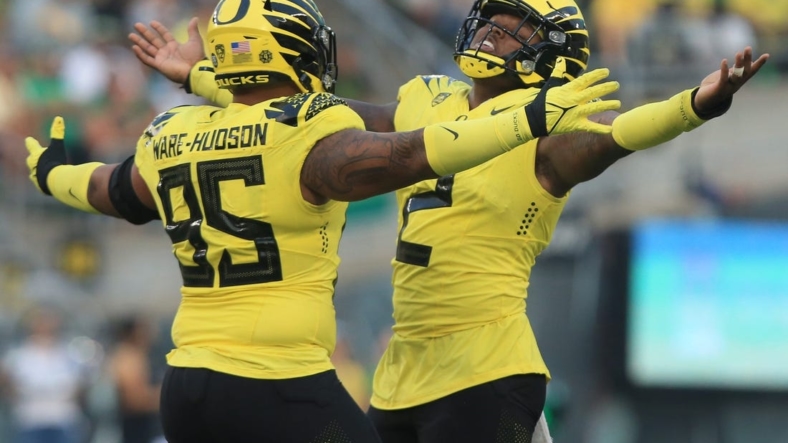 The Ducks scored touchdowns on their first nine possessions, plus a defensive TD, before punting with 4:20 remaining. They had a 604-187 edge in total yardage.

Oregon’s Mar’Keise Irving rushed for a game-high 74 yards and a touchdown on eight carries and Troy Franklin had 10 catches for 84 yards and a score. Terrance Ferguson added two TD receptions as the Ducks rebounded from a 49-3 loss to No. 3 Georgia in the Chick-fil-A Kickoff last weekend in Atlanta.

Nix threw a 13-yard touchdown pass to Ferguson and Noah Whittington added a 5-yard scoring run in the first quarter.

Nix hit Ferguson from 19 yards and Irving scored on a 1-yard run early in the second quarter to give Oregon a 28-0 lead.

The Eagles got on the board on a 7-yard pass from Gunner Talkington to Jett Carpenter with 6:03 left in the second.

Nix found Byron Cardwell Jr. on a 13-yard TD pass and added a 7-yard scoring strike to Franklin on the final play of the half to extend the lead to 42-7.

Oregon’s Cam McCormick, wearing jersey No. 18 to honor late teammate Spencer Webb, made a 2-yard touchdown reception from Nix on the Ducks’ opening drive of the second half.

Talkington threw an interception at his own 21-yard line that Trikweze Bridges returned to the 3-yard line before fumbling. Teammate Casey Rogers recovered it in the end zone to give Oregon a 56-7 lead.

Talkington, who was 12-of-21 passing for 87 yards with two TDs and two interceptions, hit Freddie Roberson with a 15-yard scoring strike late in the third to make it 63-14.

Oregon’s Kilohana Haasenritter scored on a 6-yard run early in the fourth as the Ducks reached the 70-point plateau.