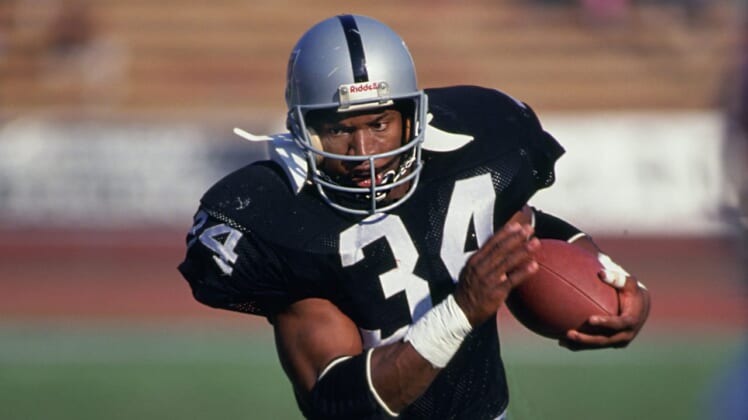 Bo Jackson’s pro football career (and baseball) was shortened by injury but when looking at the pure athlete it’s hard to argue there was anyone more gifted.

Bo Jackson was a freak.

The term freak in relation to Bo Jackson is the ultimate compliment, not a slight. Even though there have been dozens upon dozens of better, and longer-lasting, football players to wear the silver and black of the Las Vegas Raiders, there’s no question Jackson was the best pure athlete to ever wear the uniform.

While many can debate the overall importance of Bo Jackson in Raiders history, it’s hard to find a more gifted all-around athlete than the Alabama native.

“In the last 50-60 years, of the television era, I can’t think of anybody that was a better pure athlete than he was,” said author Michael Weinreb on our Silver and Black Today show on CBS Sports Radio 1140. “Even someone like LeBron James – I don’t see anyone like Bo who seemed like he was on a different plane than everyone else.”

Bo Jackson played in just 38 games as a Raiders running back compiling a total of 2,782 yards and 16 touchdowns. In his part-time four-year career for the Raiders, Jackson carried the ball just 515 times. Yet some of his carries were the most memorable in team history. None more legendary than his Monday Night Football performance on a night in Seattle: November 30, 1987. This past year as the NFL celebrity it’s 100th season, his performance was voted #25 in the league’s tally of Top 100 moments in history.

Rushing for a still team record 221 yards, Jackson’s iconic 91-yard touchdown run – in where he ran off the field into the tunnel of the Kingdome – is etched forever in the minds of Raiders and NFL fans alike.

“He might not stop until Tacoma,” ABC Monday Night Football analyst Dan Dierdorf quipped after the run.

Hall of Fame Steve Largent, who played WR for the Seahawks at the time, was on the sideline as the 91-yard run happened, said he had never heard a noise like that of Jackson running down the sideline en route to the end zone.

Not only was Bo Jackson’s 91-yard jet down the sideline one for the ages, later in the same game he invented the term “posterize” as he steamrolled heralded linebacker Brian Bosworth forever linking the two in NFL mortality.

In meeting with Jackson to recall the play as part of an ESPN interview in 2016, Bosworth expanded on why the play is still considered so iconic over 30 years later.

“I think it was Monday Night Football. A single night. A single game. If it had happened on a Sunday, it would have gotten about half as much play,” Bosworth said. “Bo had a phenomenal game, and everybody wanted to set the game up as a Darth Vader-versus-Luke Skywalker moment. And I’m, of course, Darth Vader in this deal.”

So, again, was Bo Jackson the best athlete ever to wear the silver and black? To answer the question you also have to consider all of the athletic accomplishments away from the football field. Was he the best football player in Raiders history? Of course not. But he was an unbelievable athlete from an earlier age.

Just how good of an athlete was Bo Jackson? Even as a 10-year old baseball player, Jackson had no equal and had to resort to playing adult men’s baseball to find anyone who could complete. As chronicled in his book  Bigger Than the Game: Bo, Boz, the Punky QB, and How the ’80s Created the Modern Athlete, Weinreb writes on how Jackson, playing catcher, would throw runners out from his knees – as a 10-year old.

In high school, Bo Jackson won the state decathlon without even having to participate in the final mile run event – his lead was so big. He also didn’t train once for the pole vault even though he competed in the event. His high jump during his championship run measured six-feet nine inches an he flung the discus like a plastic frisbee with the tape measuring 149 feet – and he didn’t even spin his body.

“The people around him had never seen anyone like him,” Weinreb said. “Coming up in Alabama his high school coach talked about him being to do a back flip in a shallow pond and you hear these stories about him and think they can’t possibly be true. But then the things you actually saw him do in public and on film are so incredible, that a lot of these stories probably were true.”

Those stories include Bo Jackson beating anyone who would challenge him in games like tennis, ping pong, basketball and even Pac Man.

To put Bo Jackson’s NFL Combine 40-yard time into perspective: new Raiders wide receiver Henry Ruggs III ran at NFL Combine-best 4.27 in the 40 and weighs 188 pounds. At the time of his 40-yard combine run, Jackson weighed almost 40 pounds more and did it in 4.175 seconds.

Jackson then went on to Auburn where he not only excelled at football and baseball, but at track as well. In his first season sharing the backfield with two other tailbacks in a wishbone formation, Jackson rushed for 800 yards including 123 yards in his first-ever college game against Wake Forest.

In 1983, as a sophomore, Jackson became the SEC’s fist three-sport athlete to letter in almost 20 years. In track, Jackson’s 6.18 time in the 60-yard dash meant he was the only freshman to qualify for the NCAA Championships. Bo Jackson’s fastest 40-yard time was a super-human 4.175.

Jackson also excelled in baseball at Auburn where he pretty much put on a clinic every time he took the field. He was offered a $250,000 baseball contract with the New York Yankees out of high school but Jackson turned them down. He was robbed a year of eligibility due to an unscrupulous agent and NFL owner and still finished with a career .338 average, 28 home runs, 70 RBIs, and a slugging percentage of .729.

After refusing to play for the Tampa Bay Buccaneers after he was selected first overall win the 1986 NFL Draft, Jackson signed with the Kansas City Royals. He’s still the only player ever to play in a Major League All-Star Game and the Pro-Bowl finishing his nine-year professional baseball career batting .250 with 141 home runs and 415 RBIs.

Jackson also helped create the modern athlete as we know them today complete with endorsement deals and the individual branding which has become the norm. In being selected as Nike’s first big celebrity endorser, Jackson set the table for the likes of Michael Jordan, Deion Sanders and more.

“He sort of built that whole thing up and Jordan sort of rode the wave right after,” Weinreb said. “The way he changed marketing, the way he changed what an athlete could be and how they sort of sell themselves, goes back to Bo and the way Nike was able to sell that whole campaign around him.”

In the end, although Bo Jackson’s Raiders career didn’t include any Super Bowls or sustained success, there’s no denying the pure dynamic nature of him as an athlete.

There were better running backs, there were better players overall the have worn the Raiders shield, but for our money Bo Jackson was the best pure athletic talent to ever where the uniform.