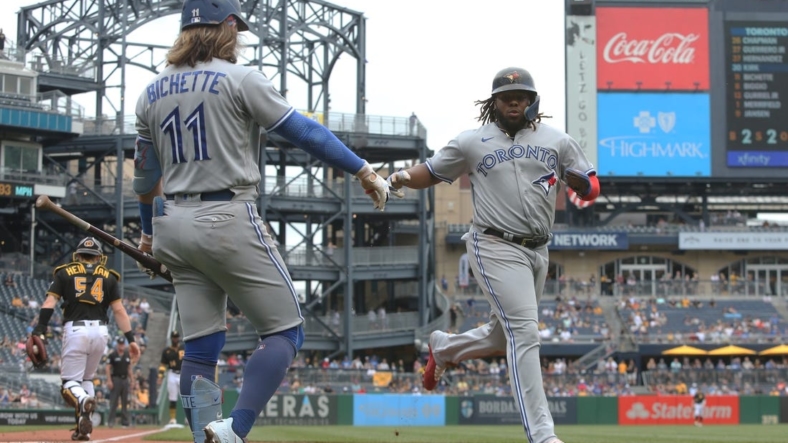 Teoscar Hernandez hit a tie-breaking RBI single in the seventh inning Sunday to give the visiting Toronto Blue Jays a 4-3 victory over the Pittsburgh Pirates to complete a three-game series sweep.

At 3-3 in the seventh inning against Pirates right-hander Duane Underwood Jr. (4-9), the Blue Jays’ Danny Jansen singled to left and Matt Chapman singled to right. After Vladimir Guerrero Jr. grounded into a double play, Hernandez drove in Jansen with a single to right on an 0-2 pitch.

Cavan Biggio hit a home run, while Whit Merrifield and Alejandro Kirk each added an RBI single for the Blue Jays, who blew an early 3-0 lead.

Toronto starter Ross Stripling (7-4) gave up three runs and two hits over six innings, with eight strikeouts and three walks. Jordan Romano pitched the ninth for his 30th save.

Oneil Cruz homered and Josh VanMeter hit a two-run double for the Pirates, who have lost four consecutive games.

In the second inning, Brubaker walked Bo Bichette, then hit Biggio with a pitch. Lourdes Gurriel Jr. grounded into a force out, leaving runners on the corners. Merrifield singled off the glove of Cruz at shortstop to drive in Bichette for a 1-0 Toronto lead.

The Blue Jays tacked on a run in the third. With one out, Guerrero Jr. reached on third baseman Rodolfo Castro’s throwing error and stole second. After Hernandez struck out, Kirk singled to right to bring Guerrero Jr. home and make it 2-0.

Leading off the fourth, Biggio hit a home run to right, his fifth of the season, to increase the lead to 3-0.

Pittsburgh cut into the lead in the bottom of the fourth. Ben Gamel and Cal Mitchell reached base on walks, with VanMeter adding with the Pirates’ first hit, a double to left that drove in both runners.

Cruz tied it 3-3 when he lined his 12th homer, an estimated 427 feet into the Toronto bullpen in center, with one out in the fifth.