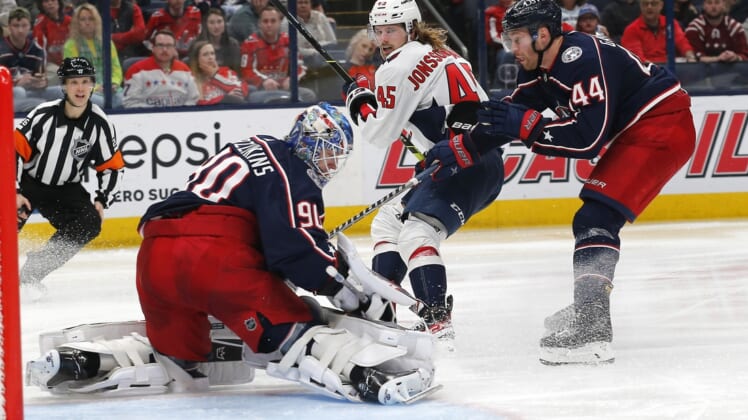 The Columbus Blue Jackets will try to resume their playoff chase when the host the St. Louis Blues Saturday.

The Blue Jackets entered Friday sitting in fifth place in the Metropolitan Division. They suffered a 7-2 loss to the fourth-place Washington Capitals Thursday to fall 13 points out of the Eastern Conference’s last wild-card playoff spot.

Prior to that defeat, Columbus won three straight games and earned points in six of their previous eight games (4-2-2).

Their effort against the Capitals was not as bad as the score indicated. They accidently scored twice into their own net and also allowed an empty-net goal.

“It was not our night. I can tell you that,” Columbus coach Brad Larsen said. “A 7-2 game, you’re thinking that is disaster, but our guys gave it their all tonight. It was a strange game. Score twice on yourselves, it’s going to be tough to win that way.”

The Blues are coming off a 3-2 shootout loss at home to the Pittsburgh Penguins. St. Louis has hit a 2-3-3 lull in its last eight games.

They were fortunate to get a point against the Penguins while getting outshot 45-25.

“We’ll take any points we can get, but at the same time, that wasn’t our best effort,” Blues forward Brandon Saad said. “It’s good to get a point, but it’s something we need to correct.”

Until the third period, the Blues were unable to sustain much forechecking pressure.

“I felt like we were too slow in the neutral zone,” Blues winger David Perron said. “We know what to do, it’s pretty simple, but when we refuse to do it, it looks slow and we don’t get in on our forecheck, and at this time of the year I just don’t believe that you can win playing that way. So we’re going to have to look at it, talk about it and rectify it. … It felt like we lacked energy. That was disappointing for sure.”

The Blues got winger Pavel Buchnevich (concussion protocol) back against the Penguins and they hope Robert Thomas (non-COVID illness) can return for this game.

Blues coach Craig Berube has been alternating Ville Husso and Jordan Binnington in goal, but he might turn to Husso again after his 43-save performance against Pittsburgh.

The Blue Jackets lost their earlier meeting with the Blues, 6-3 on Nov. 27 in St. Louis. Defenseman Adam Boqvist had two goals and an assist for Columbus in that game.

But Boqvist (upper body) has been on Columbus injury list, along with forwards Boone Jenner (back injury) and Alexandre Texier (personal leave).

Columbus is almost certain to start Elvis Merzlikins in goal for this game. He drew eight of the team’s previous 10 starts.

Joonas Korpisalo got the start in the net Thursday in the second of back-to-back games for the Blue Jackets, and lasted just 21:20 before getting pulled.

“I can’t even blame him,” Larsen said. “I’m changing the goalie because I can’t use a timeout right there. I want to save it until the end, but I’m not putting the blame on him. He had some tough breaks there.”