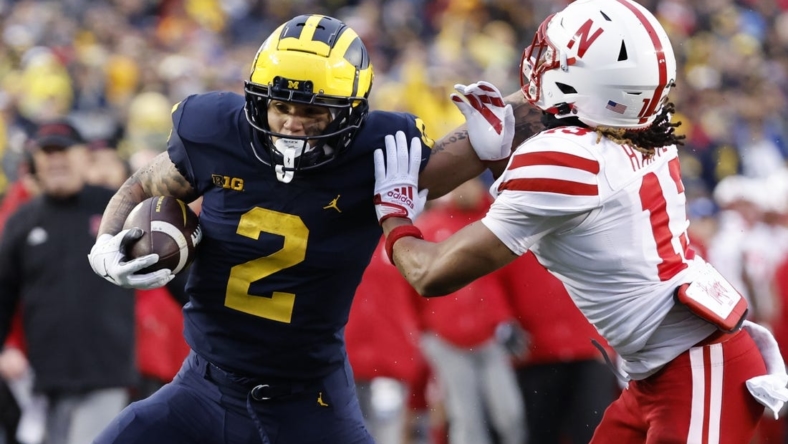 Heisman Trophy hopeful Blake Corum rushed for 162 yards and a touchdown as No. 3 Michigan rolled to a 34-3 victory over Nebraska on Saturday at Ann Arbor, Mich.

J.J. McCarthy completed 8-of-17 passes for 129 yards and two touchdowns and rushed for another score for Michigan (10-0, 7-0 Big Ten). Ronnie Bell caught four passes for 72 yards and a touchdown, while C.J. Stokes added 68 rushing yards on eight carries as the Wolverines rushed for 264 yards.

Michigan, which is 10-0 for the first time since 2006, plays Illinois in its home finale next Saturday before its annual showdown with arch-rival Ohio State on Nov. 26.

Nebraska starting quarterback Chubba Purdy sustained a leg injury on a running play late in the first half and did not return. Purdy still wound up as the team’s leading rusher with 39 yards in five carries.

Corum had 103 rushing yards by halftime as the Wolverines grabbed a 17-3 lead.

Michigan drove 80 yards in 12 plays during its first possession, capping it off with Corum’s 2-yard touchdown run. McCarthy completed a 25-yard pass to Bell during that drive.

A 28-yard completion from McCarthy to Colston Loveland and a 12-yard run by Corum set up the Wolverines’ next touchdown, a 9-yard pass from McCarthy to Bell midway through the second quarter.

A 10-play, 65-yard drive gave Michigan a three-touchdown lead late in the third quarter. Corum had 33 rushing yards in that span and McCarthy finished it off by cutting to his left on a 3-yard run.

Stokes gained 46 yards on the Wolverines’ next scoring drive. McCarthy hit Bell with a 29-yard gain but Bell fumbled just before the goal line. Andrel Anthony recovered it near the end line with 9:39 remaining.

Moody added a 43-yard field goal late in the fourth quarter to complete the scoring.