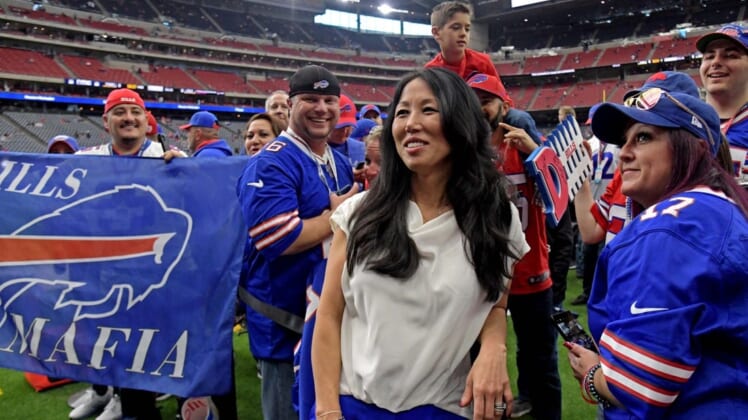 Kim Pegula, the co-owner of the Buffalo Bills and Sabres is undergoing treatment for an unspecified medical issue.

“Kim Pegula is receiving medical care as a result of some unexpected health issues. We are very grateful for the progress she has made over the past few days. She has an exceptional team of medical experts at her side.

The Buffalo News reported that employees of Pegula Sports and Entertainment were told of the situation on Tuesday morning.

The Bills and Sabres sent her well wishes on Twitter following the release of the news, their sentiments followed by hearts in team colors.

“All of Bills Mafia is sending our love and prayers to you, Kim,” the Bills tweeted. “We are with you and the entire Pegula family.”

Said the Sabres: “The Sabres family sends thoughts, prayers and love to Kim and the entire Pegula family.”

Kim Pegula, 53, and husband Terry bought the Sabres in 2011 for $189 million and the Bills in 2014 for $1.4 billion. She is president of Pegula Sports and Entertainment, the umbrella organization for the Bills, Sabres, the Rochester Americans of the American Hockey League, and the Buffalo Bandits and Rochester Knighthawks of the National Lacrosse League.

She is the mother of three children and stepmother to two more. The Pegulas’ daughter, Jessica, is the No. 8-ranked women’s tennis player in the world. Earlier this week, Jessica Pegula withdrew from the Eastbourne International tournament in the United Kingdom, which is set to begin on Saturday and is the final tune-up for Wimbledon.