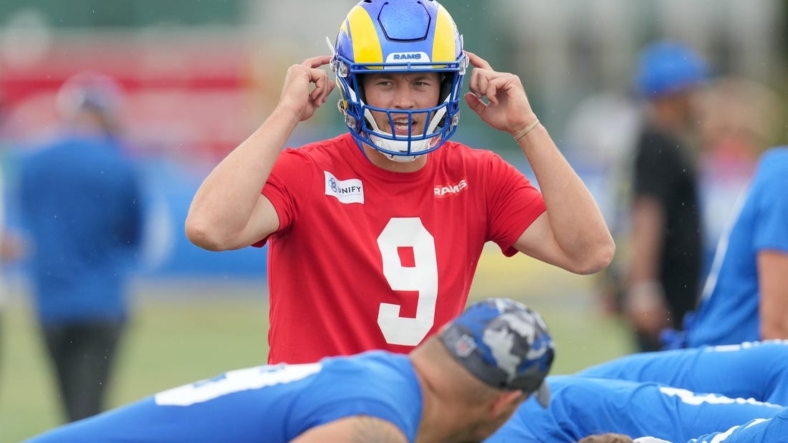 The Los Angeles Rams are eager to start defense of their Super Bowl crown, while the Buffalo Bills are focused on reaching the big game for the first time since the 1993 season.

The two teams begin pursuit of their season goals when the NFL season kicks off Thursday night at Inglewood, Calif.

“It’ll be a big challenge for us,” Bills coach Sean McDermott said. “They’re the defending Super Bowl champs, (and) at their place, so we’ve got to play good team ball.”

Buffalo is a popular choice as a consensus 2.0-point underdog.

The story has been similar at BetRivers, where Buffalo has drawn 57 percent of the spread-line bets and 62 percent of the money. The action has been more one-sided at PointsBet, where the 2.0-point line as of Thursday morning had seen the Bills backed by 71 and 77 percent of the action respectively.

The Rams went 12-5 in the regular season last year before going on to secure a 23-20 victory over the Cincinnati Bengals in their home stadium in the Super Bowl.

“When you have great ambition to be legendary and elite, it’s easy to turn that page and go strive for the next big thing,” Ramsey said.

The Bills, who went 11-6 last season, are for a breakthrough season with Josh Allen firmly entrenched near the top of the best quarterbacks list. He passed for 4,407 yards, 36 touchdowns and 15 interceptions last season.

While Allen is healthy, counterpart Matthew Stafford of the Rams battled an injury to his throwing elbow all last season and the troubles continued through the offseason and training camp.

Stafford has been diligently rehabbing the injury and said he can make all the necessary throws.

“I feel good, I’m ready to go, no limitations,” said Stafford, who passed for 4,886 yards, 41 touchdowns and 17 interceptions last season.

All that offensive firepower has led to a 52-point Over/Under at BetMGM and BetRivers, with the Over drawing 62 percent of the bets and 68 percent of the handle at the former and 61 and 62 percent, respectively, at the latter.

Of course, the Rams also possess one of the top defensive players in the game in tackle Aaron Donald. The three-time NFL Defensive Player of the Year is two sacks away from 100 for his career.

PROP PICK
Ben Skowronek, 20.5 receiving yards (-110 at BetMGM): With Jefferson sidelined, Skowronek and Tutu Atwell will be in the mix for snaps as the third receiver behind Kupp and Allen Robinson II.

Jefferson had 50 receptions for 802 yards and six touchdowns last season, adding another nine catches for 102 yards in four playoff games. If Skowronek earns the majority of the third-receiver snaps, he could easily top 21 yards on a single reception.

TRENDING
Kupp scoring the first touchdown (+550) has been the most popular prop bet at BetMGM, while Allen throwing more than 1.5 touchdown passes (-175) leads the way in the prop market at BetRivers.

PREDICTION
Bills 24, Rams 23: For all of the offensive weapons on both sides of the ball, defenses figure to have the upper hand early in the season with a limited preseason slate.

With Stafford reportedly coming off an offseason shoulder surgery and the Bills eager to prove they’re finally ready to surpass Kansas City as the class of the AFC, this is a more critical season opener for Buffalo.