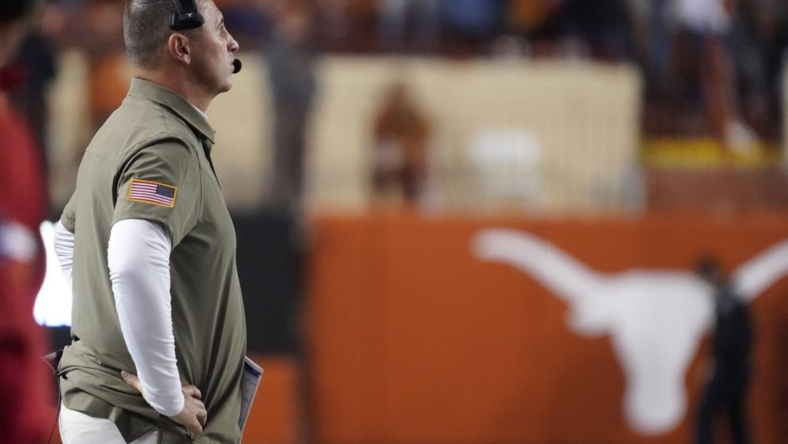 Bijan Robinson rushed for a career-high 243 yards and four touchdowns as Texas rolled to 55-14 win over mistake-prone Kansas on Saturday afternoon in a key Big 12 Conference game in Lawrence, Kansas.

The Longhorns (7-4, 5-3 Big 12) can still earn a spot in the league championship game if they beat Baylor on the day after Thanksgiving and get a Kansas win over Kansas State.

Texas also got 108 yards on 11 carries from Jonathon Brooks that included two TDs in the fourth quarter, one of which covered 70 yards. The Longhorns finished with 539 total yards, 427 on the ground.

Jayhawks’ quarterback Jalon Daniels returned to action after missing the past 4 1/2 games with a shoulder injury. Daniels finished 17 of 26 for 230 yards, two TDs and an interception. Kansas (6-5, 3-5), which started the season with five straight wins, went 1-4 in Daniels’ absence but is still bowl eligible for the first time since 2008.

Robinson scored twice in the opening quarter on a 1-yard TD run and then a 17-yard sprint to the end zone at the 7:50 and 5:33 mark, respectively. The Longhorns added a 28-yard field goal by Bert Auburn nearly three minutes into the second quarter to go up 17-0.

Kansas drove to the Texas 12-yard line on the ensuing possession, had a touchdown pass called back because of a penalty and then missed a 34-yard FG attempt with 7:23 to play before halftime.

The Longhorns added to their lead on Quinn Ewers’ 15-yard touchdown pass to Keilan Robinson’s with 4:56 to play in the second. After Daniels was intercepted by Texas’ Jaylan Ford at the UT 28, the Longhorns drove 60 yards in nine plays over the final 2:08 of the half to Bijan Robinson’s 1-yard TD plunge on the final play before halftime to extend the lead to 31-0.

Bijan Robinson scored his fourth TD on 42-yard run on Texas’ opening possession of the third quarter that pushed the margin to 38-0. Auburn added a 40-yard FG at 5:16 of the third.

Kansas broke through when Daniels hit Torry Locklin and Luke Grimm on TD passes of 12 and 14 yards in the fourth quarter. Texas countered with Brooks’ pair of scoring runs.