There were five bowl games on the slate Monday to get the 2018 calendar year kicked off in style, including the two playoff games between Oklahoma and Georgia, Alabama and Clemson.

The early games were all thrilling in their own right. UCF proved it really deserved more respect than it got from the College Football Playoff selection committee, taking down Auburn. South Carolina downed Michigan with a furious late-game push, and Notre Dame might have finally found a quarterback in its narrow win over LSU.

Then came the Rose Bowl between Georgia and Oklahoma. It was as back-and-forth a game as we’ve witnessed between two top teams all year. It ended up coming down to the wire, and let’s just say Sooners fans are not happy about the result.

Clemson and Alabama closed the evening out with a third-straight postseason battle. The two teams are responsible for winning the last two national titles, but this wasn’t the battle extraordinaire we were hoping to witness.

These are the biggest winners and losers from Monday’s bowl games.

If you knew heading into Monday’s games that Baker Mayfield and the Oklahoma Sooners would score 48 points against Georgia, you’d probably assume the Bulldogs got roasted. Yet that most certainly did not happen, because the Dawgs out Big 12’d the Big 12’s top dog.

Freshman quarterback Jake Fromm was superb. Playing within the flow of the game, he hit on 20-of-29 attempts for 210 yards, two touchdowns and no interceptions.

But it was the running game that stole the show offensively. The Sooners were outmatched from the get-go against Georgia’s offensive line, which bullied Oklahoma’s defense into submission all game. Sony Michel and Nick Chubb ripped off 326 yards between them on just 25 carries (that’s an average of 13 yards per, folks), scoring five times on the ground.

After blocking a kick in double-overtime, of course it was Michel who capped off the game with a 27-yard run to cap off the insane win.

The 54 points scored by Georgia in this game marks the most points scored by this team in any game this season. The 17-point comeback win was the biggest in Rose Bowl history. It’s safe to say the Dawgs are peaking at the right time. And given the efficiency of this offense we cannot wait to see what they do next week in the title game.

Loser: Jarrett Stidham picked a bad time to have a bad game 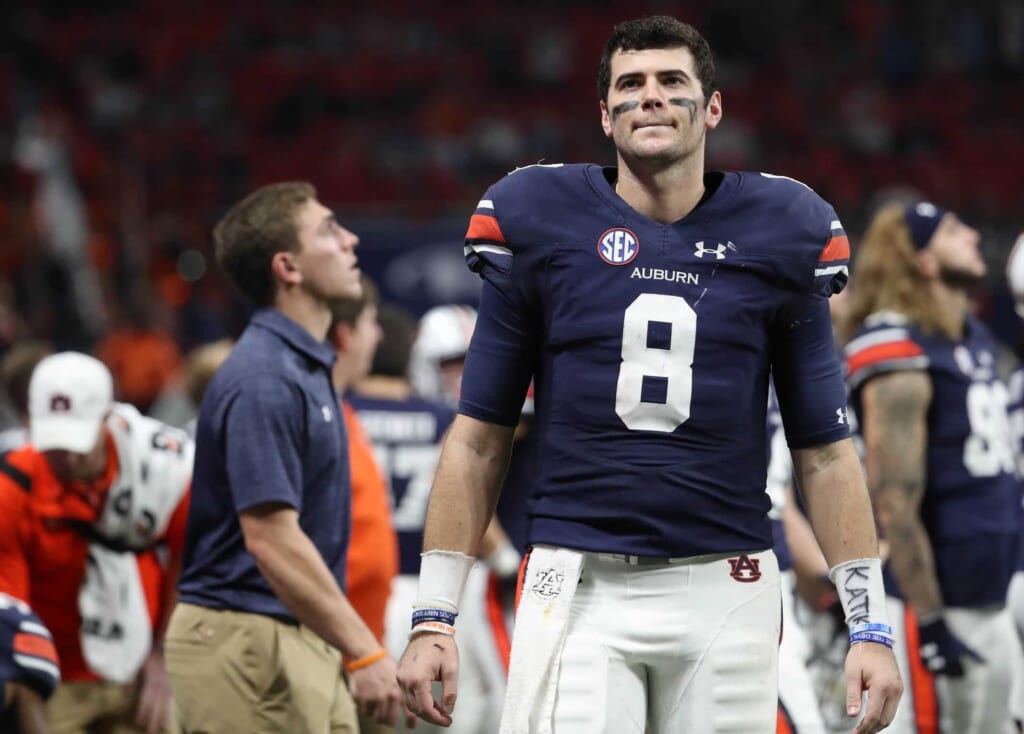 Former Baylor quarterback Jarrett Stidham really turned up his game for the Auburn Tigers this season. His play was a big reason Auburn was able to beat the likes of Alabama and Georgia during the regular season. Unfortunately, he had arguably the worst game of his campaign on Monday against UCF.

Stidham did pass for 331 yards, which is impressive. He also completed 65 percent of his passes, which is darn good.

That said, he also threw two interceptions and lost a fumble. The fumble turned into a touchdown on UCF’s next drive. The first interception turned into six points when Chequan Burkett took it back 45 yards to the house. The final interception sealed the win for the Knights with 24 seconds remaining, as they were able to take a knee on the next play in victory formation.

Winner: Da’Ron Payne can do it all

In what was a defensive struggle between Clemson and Alabama, it’s not surprising that the player who had the most to do with the outcome was a defensive lineman. Da’Ron Payne had an incredible sequence in the third quarter when the game was extremely close, 10-6 in favor of the Crimson Tide.

Aided by a timely pass rush by Anfernee Jennings, who hit Kelly Bryant as he let the ball go, Payne made a spectacular interception and rumbled his way 21 yards on the return. This play put an end to the most promising drive Clemson had put together in the game, which was a huge momentum killer for the Tigers.

Then just seven plays later, it was none other than Payne who capped off the drive with a touchdown to put the Crimson Tide up 17-6. He lined up in the backfield as what appeared to be a blocker in a big running package. But instead of blocking, he broke away to the right corner of the end zone, where Jalen Hurts found him for the touchdown pass.

In both instances, the big man showed off impressive hands. This sequence proved to be the beginning of the end for Clemson, which ended up getting blown out 24-6.

Loser: Lincoln Riley shrunk when it mattered most

With the game on the line, you have to use your best players. And when it comes to the Sooners, there’s only one guy that fits that bill — Heisman winner Baker Mayfield.

In his final collegiate game, Mayfield hit some rough patches but still had a huge impact and ultimately is the reason the Sooners made it to overtime in the first place. He would finish with 287 yards, two touchdowns, an interception he’d love to have back and a touchdown reception on a brilliant playcall by Riley at the end of the first half.

Yet when the game went into overtime, Riley went ultra-conservative with his playcalling and essentially took the game out of Mayfield’s hands.

It was completely uncharacteristic of the Oklahoma offense, and goes against everything that makes Mayfield great. He is a gunslinger who never shies away from making a tough throw into a tight window. But in overtime, and much of the second half, really, Riley was calling for dink-and-dunk stuff that Georgia’s speedy linebackers ate for breakfast.

In the end, Mayfield’s final game ended when kicker Austin Seibert, whose first kick in overtime was sketchy indeed, didn’t get any air under his kick in the second overtime period. An offensive line whiffed, and the kick was blocked. It was pretty much the most anticlimactic way Mayfield’s career could have ended, and it was a shame.

When the Knights finished championship weekend still undefeated, we remarked how ridiculous it was that the selection committee wouldn’t give them any respect. That prediction proved correct, as the committee handed UCF a No. 12 ranking to close out the campaign. Not only did the only undefeated FBS team in the nation not get a sniff at the playoff, it wasn’t even considered a top-10 team.

Honestly, that’s disgraceful. And the Knights proved it Monday by taking down Auburn, which was ranked No. 7 by that same committee, even after losing three games in 2017 before the bowl game.

McKenzie Milton shrugged off a tepid start to put on a show. He finished with 358 yards and three touchdowns, doing significant damage both through the air and on the ground.

The team’s underrated defense forced three turnovers and sealed the win with a 45-yard pick-six by Chequan Burkett. Shaquem Griffin was magnificent, leading the Knights with 12 tackles, including 3.5 for a loss, and 1.5 sacks.

This is a team that deserved a shot to prove itself against the other top-seeded teams in the nation. And it’s the most compelling argument to support expanding the playoff to eight, or even six teams.

The Tigers, who averaged more than 35 points and nearly 450 yards per game this season, were utterly destroyed by the defense of Alabama. Clemson had just 73 yards of offense in the first half, converting just 3-of-8 on third downs. It wasn’t until the fourth quarter that the Tigers finally eclipsed the 100-yard mark.

In particular, Kelly Bryant was well out of his depth. It was crystal clear from very early in the game that the Clemson coaching staff was scared to let him loose in the passing game. This only exasperated the fact that the Tigers were getting stymied in the run game, meaning they literally couldn’t do anything to spring a big play. Bryant finished with 124 yards on 18-of-36 passing with no touchdowns and two interceptions, including a pick-six.

The entire offense managed just 188 yards and 14 first downs while scoring just two field goals. It was a very disheartening display, especially when you remember how dynamic Deshaun Watson was against Alabama the previous two seasons.

Winner: Ian Book comes out of nowhere to spark the Irish 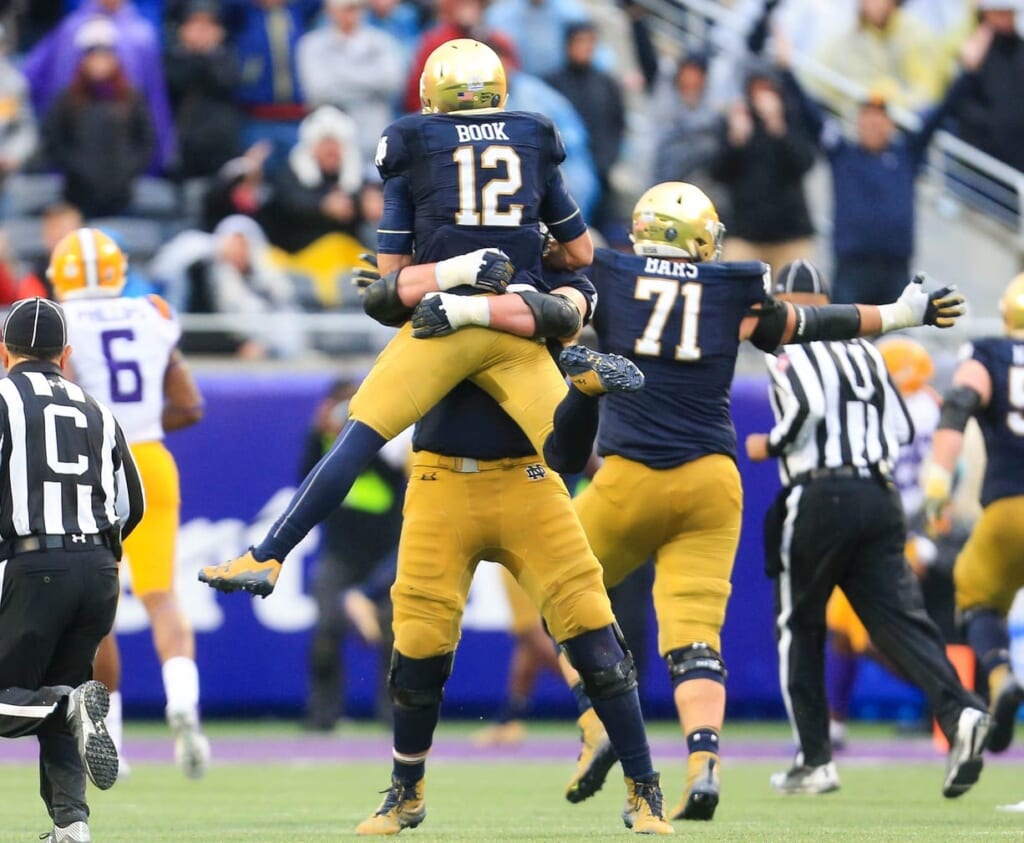 Sophomore quarterback Ian Book didn’t play at all in 2016 and barely played this past season for the Fighting Irish. When he did play, he was spotty, throwing two touchdowns and three interceptions, two of which were tossed against North Carolina back in early October.

Brandon Wimbush, the team’s starter all year, struggled with accuracy Monday. He was ultimately replaced by Book and finished with just 52 yards on 3-of-8 passing. The game was knotted up at 0-0 at that point, right before halftime.

Book stepped in and led a field-goal scoring drive to close out the half. Then he really showed off some moxie, leading two touchdown-scoring drives in the second half to propel the Irish over LSU by the score of 21-17.

A ton of credit goes to Miles Boykin as well for making some outstanding catches, including the game-winning 55-yarder late in the fourth quarter.

Michigan had the Outback Bowl in hand midway through the third quarter. Up 16-3, the Wolverines were completely in control of the game. That’s when the wheels came off.

Sophomore quarterback Brandon Peters turned the ball over three times — two horrible interceptions and a lost fumble — in the final 16 minutes of the game. Michigan turned it over four times after Noah Furbuch picked off Jake Bentley with nine minutes left on the clock in the third quarter.

As we’ve seen all year, Michigan’s offense was a huge liability, with the quarterback position being the catalyst for disaster. Whether it was Peters, John O’Korn or Wilton Speight, Michigan’s passing game was a problem. As a result, Jim Harbaugh’s Wolverines went 8-5 and lost their bowl game due to an epic collapse down the stretch.

At least there’s hope for next year, as recently transferred former Ole Miss quarterback Shea Patterson should be a huge boost if he doesn’t have to take a year off.

As we previously noted, Michigan had full control of the Outback Bowl halfway through the third quarter. Then Jake Bentley, who had a rough first half, came alive to lead a six-play, 77-yard touchdown-scoring drive.

With under a minute remaining in the third quarter, the Wolverines still led 19-9. Then in the blink of an eye, the Gamecocks’ fate was altered when Brandon Peters fumbled the ball in his own territory.

One play later, Bentley found Bryan Edwards on a beautiful 21-yard pass in the end zone to pull to within three points. Once again, the defense stepped up big, forcing a punt after allowing just one first down. After two failed plays, Bentley woke up in a major way, completing four straight passes and ending the drive with a 53-yard touchdown strike to true freshman Shi Smith, and the throw was perfect.

The Gamecocks tacked on another three points to win the game, 26-19, stunning the Wolverines to improve to 9-4 on the season.

Loser: LSU’s defenders going to have nightmares about that last TD

There’s not a ton that needs to be said here. When Miles Boykin caught the game-winning touchdown on the right sideline, two defenders had a chance to bring him down.

Cornerback Donte Jackson was caught out of position on the perfectly thrown pass and ended up getting shoved out of bounds by Boykin. Safety John Battle was sort of hanging back, perhaps afraid of being called for targeting. When he realized Jackson was not going to stop Boykin, he went in, head first to try and bring the receiver down but failed to wrap him up. Both Jackson and Battle had second chances to bring Boykin down but failed miserably.

Now, Boykin made the play happen. His extraordinary effort must be praised. At the same time, that play will haunt those two defenders for some time, because both had a shot to stop it from happening.