Heading into Week 11 of the 2015 college football season, there are still many teams in the hunt for the College Football Playoff in January.

Most top contenders still have some difficult games ahead of them, and the playoff picture should become increasingly clear after every week of action from now until the end of the season.

As the action gets hotter, we decided to take a look at the biggest strengths and weaknesses of each of the top 10 programs still in contention for the four-team playoff.

Whenever Clemson has needed a big play this year, Watson has found a way to deliver. Early interceptions appeared to be problematic, but he has now gone three games in a row without throwing one.

While Watson hasn’t put up gaudy numbers to match the top passers in the nation, he has been efficient and accurate (69.7 percent completion rate), totaling 2,726 yards through the air and on the ground, with 25 combined touchdowns.

The meteoric development of this sophomore has had everything to do with the undefeated season being enjoyed by the Tigers.

Biggest weakness: Vulnerable to big plays on the ground

Most of the season we’ve seen Clemson’s lightning-fast defense shut the door on opposing rushing attacks. However, the past couple of weeks have shown us the Tigers are vulnerable to getting gashed for huge plays on the ground.

The North Carolina Wolfpack had two big runs of over 40 yards in Week 9, and Dalvin Cook of FSU went off in Week 10 with 194 yards rushing, including a number of big plays, none bigger than his 75-yard touchdown scamper in the first quarter. 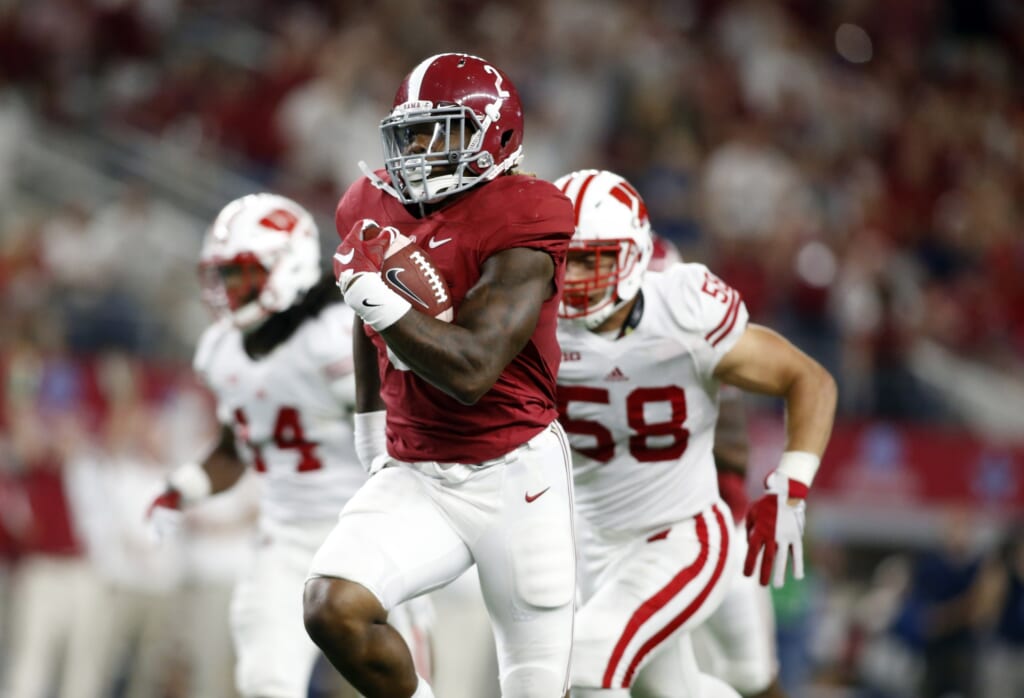 The reason Alabama has a chance to win the championship is that, as usual, Nick Saban’s program is centered around being able to run the ball at will and being able to stop the run defesively.

Running back Derrick Henry, who is an emerging Heisman favorite, now has 17 rushing touchdowns after his 210-yard, three touchdown outburst against LSU on Saturday.

In the same contest, Leonard Fournette was held to just 31 yards on 19 carries (with one touchdown) against ‘Bama’s No. 2-ranked run defense in terms of yards per game.

Jake Coker, to this point, hasn’t been any better than serviceable for Saban’s offense.

On the season he has just 11 touchdowns and seven interceptions. Worst still, Coker hasn’t thrown a touchdown pass in three games, throwing one interception in those contests.

If Henry continues mowing opposing defenses down, then the Crimson Tide might still win a championship. But if he falters, Coker hasn’t done anything to inspire confidence about his ability to rise up in Henry’s stead.

Ezekiel Elliott could be featured here, but we’re going to highlight a different strength instead. Ohio State’s pass defense has been tremendous this year, from back to front.

Allowing only 163.9 passing yards per game, opposing quarterbacks are only completing 49 percent of their passes. Perhaps that is because Tyquan Lewis, Joey Bosa and Co. have racked up 27 sacks. All this pressure has helped force 10 interceptions — three of which have been returned for touchdowns.

It’s hard to imagine any team in the nation beating the Buckeyes when the offense is having a “on” day. However, given the lack of continuity this year on this side of the ball, it’s not a given Ohio State will have this luxury when the program goes up against Michigan State and Michigan to close out the season.

Head coach Urban Meyer announced on Monday that he is going with quarterback J.T. Barrett in Week 11 against Illinois. While it’s true Cardale Jones has an undefeated 11-0 record as a starter, he hasn’t been able to generate many explosive plays, while Barrett specializes in them.

It’s hard to imagine Baylor’s offense taking a game off as long as Coleman is out there running routes for freshman quarterback Jarrett Stidham, who already has discovered his usefulness after just one game. The duo connected 11 times for 216 yards and two touchdowns in Week 10.

On the season Coleman has 20 touchdown catches in just eight games. He’s caught at least two in every game but one this season, and no team has been able to shut him out of the end zone.

Baylor’s defense appears to be the best in the Big 12, but one wonders how the front line, which has been pushed around at times, will fare against the brutal offensive lines of the SEC or Big Ten. Also, it’s kind of alarming that the Bears don’t put more pressure on opposing quarterbacks (16 sacks), considering how often teams are forced to throw, coming from behind. 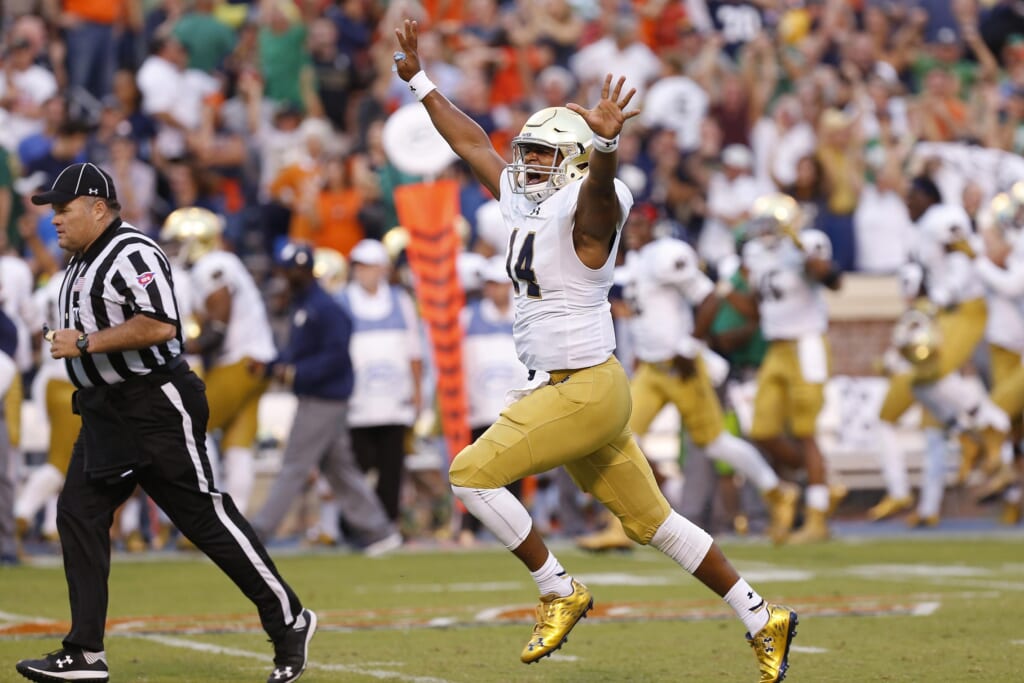 The Fighting Irish wouldn’t be anywhere near the playoff conversation without the outstanding late-game play of Kizer, who has a knack for making huge throws with the game on the line. Since taking over for Malik Zaire, the sophomore has led Notre Dame in three fourth-quarter come-from behind wins.

His six-touchdown performance on Saturday against Pitt was the finest of the season. It’s quite clear the Irish are championship contenders as long as Kizer is behind center.

The Irish do many things well, but defending the run isn’t often one of those things. Allowing 4.7 yards per carry, 168 yards per game and 14 total rushing scores, Notre Dame’s run defense could keep the program from finishing on top in 2015.

It’s often assumed that there aren’t any good defenses in the Big 12, but Oklahoma State proves this theory wrong, to a point. While the Cowboys do give up plenty of yards and points at times, they also have a knack for creating pressure and turnovers on defense.

With 33 sacks, 14 interceptions, 23 passes deflected and nine forced fumbles, Oklahoma State’s defense is opportunistic. As we know, big games are almost always decided on turnovers, and these guys know how to create them.

Mike Gundy’s offense isn’t — how do you say? — normal.

Led by two quarterbacks who have combined to score 35 times, the Cowboys do much of their damage through the air. Even though 12 different players have carried the ball, the team just cannot generate a potent rushing attack, averaging 3.9 yards per carry. It’s worth noting they do have 19 rushing scores, but nine of them came via quarterback runs.

If a top team corals the passing game, then the Cowboys could be stuck in a rut.

The undefeated Hawkeyes have been stout against the run all season, allowing 101.4 yards per game, 3.2 yards per carry and a long run of just 37 yards. Teams just can’t find many running lanes, and Iowa has been taking full advantage of one-dimensional offenses, as a result.

If a high-powered offense manages to crack Iowa’s defensive secondary this postseason and puts points on the board early, then the Hawkeyes could be in trouble. Junior quarterback C.J. Beathard has struggled with accuracy down the stretch and has yet to pass for 300 yards or more this year.

With just 1,831 passing yards and 10 touchdowns on the year, Beathard cannot be counted on to keep Iowa in a shootout. 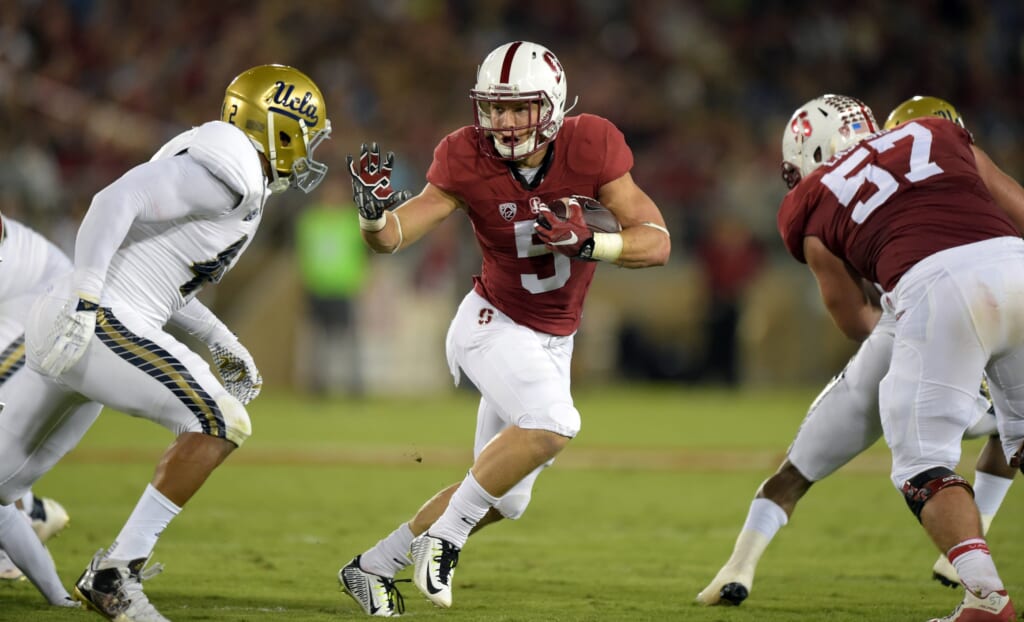 Biggest strength: Christian McCaffrey can do it all

A special mention must go out to senior quarterback Kevin Hogan, who has really showed some leadership of late. But without McCaffrey coming through with big games every weekend for the Cardinal, this team wouldn’t be in line to potentially play for a championship this year.

McCaffrey has totaled 1,532 yards and eight touchdowns this year for Stanford and has rushed for at least 100 yards in his last seven games.

Biggest weakness: Where are the receivers?

Stanford hasn’t had many big plays made by wide receivers this year. Junior Austin Hooper leads the team with 356 receiving yards on 22 catches and has scored five touchdowns. McCaffrey is second on the team in yards and has more catches than any receiver. Besides him, there isn’t another player on the team with at least 20 catches.

Hogan has made some huge plays to a few of Stanford’s receivers, but there isn’t much in the way of a consistent receiving threat on the team.

Biggest strength: Leonard Fournette is unstoppable (except when he plays ‘Bama)

Nobody should expect Fournette to have another bad game this year after the Crimson Tide held him to just 31 yards on 19 carries in Week 10. It was a rare effort by one of the top defenses in the nation, and it’s one that won’t be replicated this season.

Before Alabama stymied him, Fournette was averaging 193 yards per game. He’s going to get on track again in Week 11 when the Tigers host Arkansas Saturday evening in Baton Rouge.

Biggest weakness: Defense gives up too many points, consistently

LSU has allowed opposing teams to score at least 20 points in every game but one, and that one came back in Week 2, which was the first game of the season. Since then, the likes of Eastern Michigan and Western Kentucky have found ways to pierce through for scores, and the Tigers are allowing 23.5 points per game as a result.

Alabama’s offense bullied LSU to the tune of 434 total yards, 28 first downs and 30 points on Saturday, handing the Tigers their first loss of the season.

Mayfield leads an incredibly explosive aerial attack. The junior quarterback has thrown 28 touchdowns this year compared to just four interceptions. Five of those went for 61 yards or longer to five different players, meaning opposing defenses must truly pick their poison.

Mayfield has also added five rushing scores, bringing his seasonal total up to 33. He rarely makes mistakes and knows how to make defenses pay for getting out of position.

It’s hard to find a big weakness on Bob Stoops’ team, which features outstanding offensive and defensive numbers all around.

The biggest weakness we’ve see to this point in the season is a lack of focus, which is the biggest reason for the only loss of the season for the Sooners to Texas, which was in free-fall mode at the time. Truly, the biggest difference in that game was that Charlie Strong and his players wanted it more.