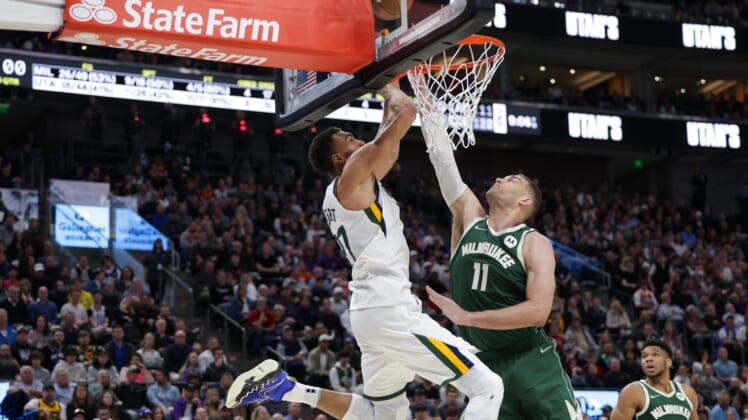 Donovan Mitchell and Mike Conley each scored 29 points and combined for 15 assists as Utah lost for the fourth time in seven games. Rudy Gobert added 18 points and 14 rebounds in the defeat.

The Jazz held an 11-point lead in the third quarter but couldn’t hold on.

Antetokounmpo and Jevon Carter both hit two free throws in the final 13 seconds to clinch the victory for Milwaukee after Gobert brought Utah to within two points.

After trailing by nine at halftime and shooting 5-for-20 in the second quarter, the Jazz soared early in the third quarter with 13 consecutive points.

The Jazz soared early in the third quarter with 13 consecutive points and went on another scoring spurt with 12 straight points to take a double-digit lead, 89-79, with 3:40 left in the third.

Holiday continued to roll in the fourth after scoring the Bucks’ final four in the third with seven straight as Milwaukee went ahead 96-95. Antetokounmpo then keyed a 7-0 run as the Bucks grabbed a 107-100 lead.

Conley hit a 3-pointer and made two free throws as the Jazz pulled within two with 1:26 to go. Utah had a chance to tie, but Antetokounmpo defended a shot by Mitchell with a minute left.

The Jazz were missing one of their key players as Bojan Bogdanovic sat out with a strained left calf.