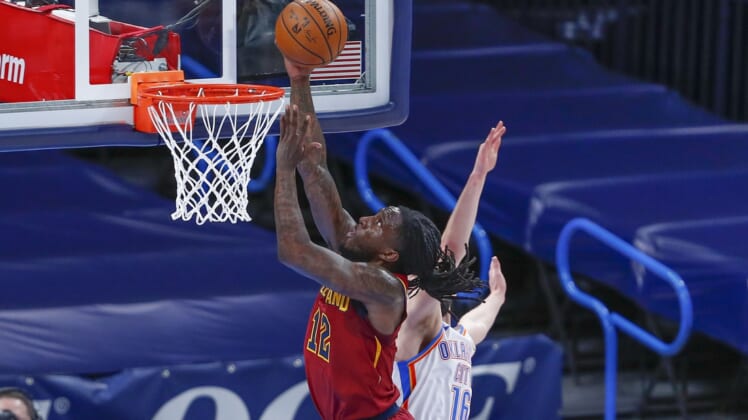 Collin Sexton scored 27 points to lead the Cleveland Cavaliers to a 129-102 win over the host Oklahoma City Thunder on Thursday night.

The Cavaliers have won consecutive games for the first time since a four-game winning streak that ended March 1.

The Thunder lost their fifth straight, their longest skid since a six-game losing streak early in the 2014-15 season.

For the second consecutive game, Cleveland came up big coming out of halftime.

The Cavaliers, who put up 43 points in the third quarter in beating San Antonio on Monday, scored the first 11 points of the third on Wednesday en route to doubling up the Thunder 28-14 in the quarter to lead by 18.

Cleveland did it by turning defense into offense, forcing three quick turnovers during the stretch, each time turning on the other end. Oklahoma City missed its first five shots of the quarter.

Darius Garland once again helped get Cleveland going after the break, with a pair of assists during the stretch.

In their last two games, the Cavaliers have outscored their opponents 71-47 in the third.

Taurean Prince added 22 points off the bench for the Cavaliers, while Garland finished with 21 points and five assists. Kevin Love had 18 points and 11 rebounds, while Isaiah Hartenstein pulled down 12 boards off the bench.

Cleveland shot 51.1 percent from the field and had 24 points off of 18 Oklahoma City turnovers.

Ty Jerome led the Thunder with a career-high 23 points, going 9 of 16 from the field with five 3-pointers. Theo Maledon had 14 points but was just 6 of 17 from the floor. Moses Brown had 13 points and 11 rebounds.

The game got off to a fast start offensively, with the Thunder scoring the game’s first seven points. The Cavaliers’ offense quickly caught up, however, with the score tied at 38 the teams each scored 38 after the first quarter. Oklahoma City shot 62.5 percent in the quarter.

The Cavaliers’ kept up the offensive success, but the Thunder struggled after that, shooting just 44.9 percent for the game.