We figured it would be fun to put together the best possible roadtrip in each of the four major regions in the United States. We will start this four-part series with the American East Coast, where it is loaded with some of the most historical sites in the sports world.

Let’s start in Maine and work our way down. Yes, we did just write Maine.

Why not start at a Minor League Baseball game? This is America wrapped up in a small stadium with fans who love the sport and players who are attempting to make their dreams come true. Hadlock Field is home to the Portland Sea Dogs, who are the Double-A affiliate for the Boston Red Sox. 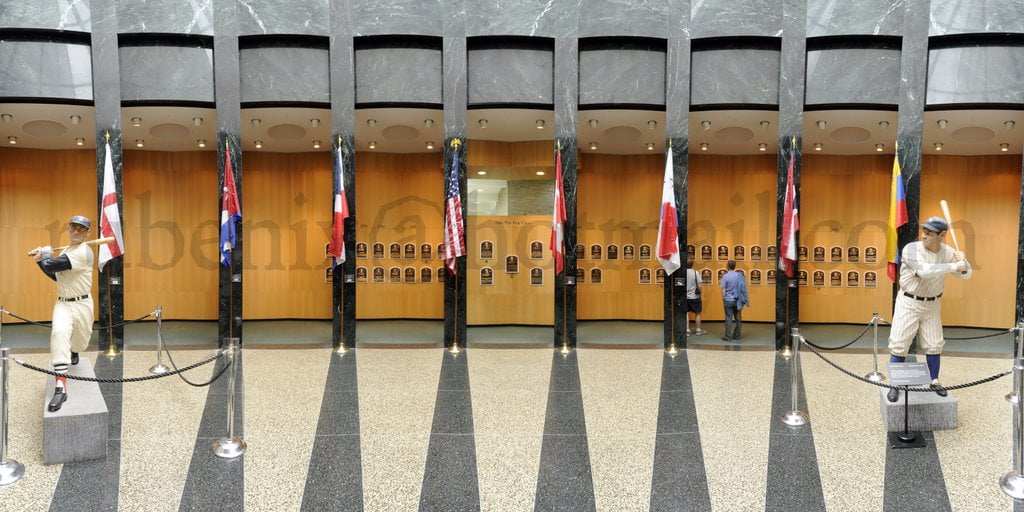 What an amazing experience right here. The history of the single greatest American sport as it relates to our shared history, all in one building and representing the greats of the past. The chills. The deepness that comes with entering these heralded halls. Nothing in the sports world can compare to what the Baseball Hall of Fame brings to the table.

And it’s in a beautiful area of New York in the Catskill Mountains. A perfect roadtrip would consist of a couple days here with one full day devoted to taking in the surroundings and the other day devoted to hanging around the Hall of Fame. Heck, they even have a “Cooperstown Beverage Trail.” That sold me right there.

The most famous playground in the United States. Created in 1950, Rucker Park is a basketball park in Harlem that has hosted some of the greatest NBA players of all time…some of them before they became the face of basketball itself. From Julius Erving and Wilt Chamberlain to LeBron James, Lance Stephenson and Allen Iverson, this is a park that many of the greats have called home. 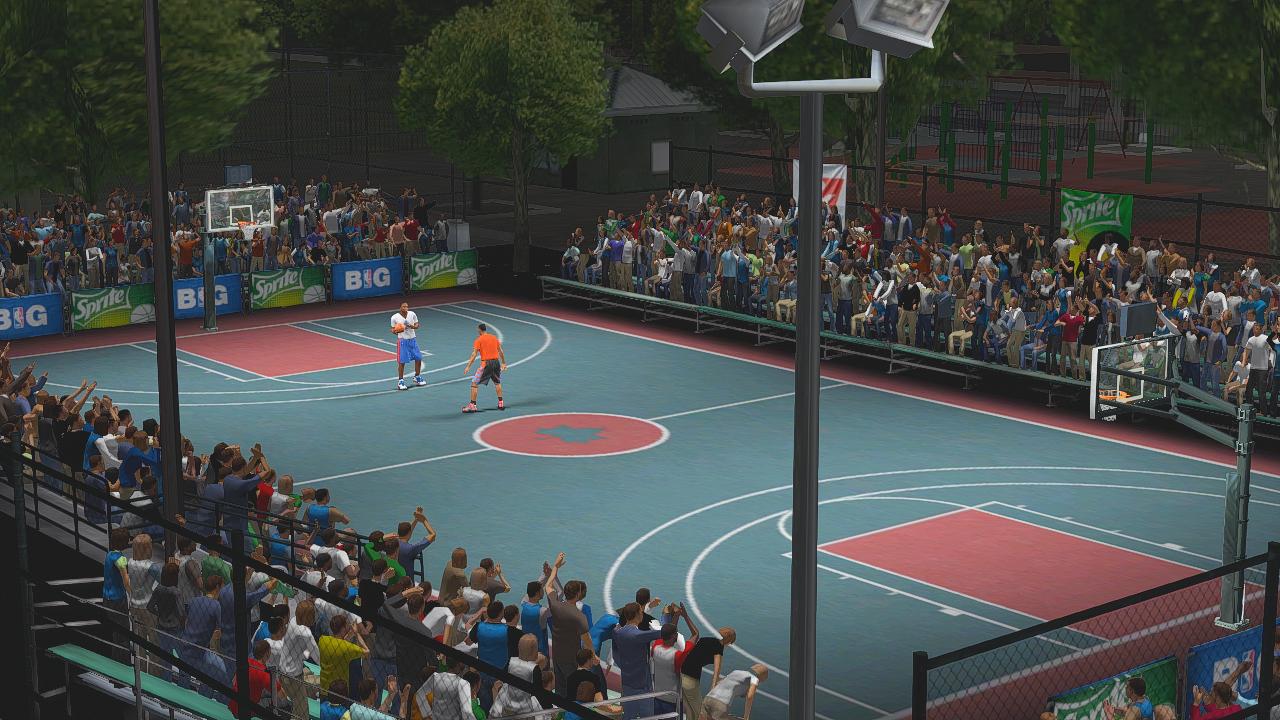 Many basketball tournaments have been held here, including the famous Rucker Tournament. Needless to say, this is the Yankee Stadium of the basketball world. Interestingly enough, it’s directly across the street from the old Polo Grounds. Talk about one trip to a street that represents American sports to its fullest. 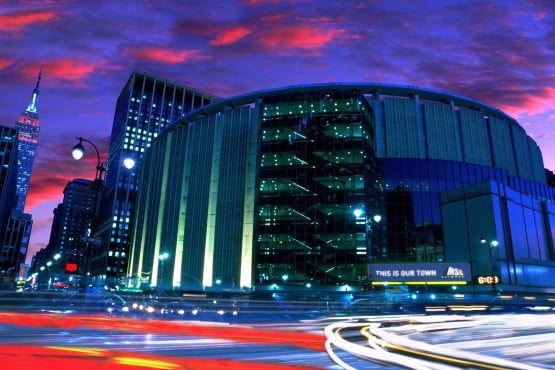 From Wayne Gretzky and Muhammad Ali to Elvis and Michael Jordan, this is one venue that some of the most famous Americans made their names known. The home of the New York Knicks and New York Rangers, Madison Square Garden is a representation of what professional sports in the United States are.

If you missed out on visiting Old Yankee Stadium, that’s a rather unfortunate situation for you. New Yankee Stadium is a state-of-the-art facility built across from the original. It might not have the history of The House that Ruth Built, but it’s still something that every baseball fan should see.

The location of the single greatest sports moment in the history of the United States. I am not sure we have to say much more about this. Herb Brooks, Lake Placid, the Winter Olympics, the Soviet Union and the United States. Oh and there was a hockey game once played here. Not sure, but Al Michaels might have been on the call.

The beauty of a horse track as the sun is about to come up. No this isn’t the midwest or south, where horse racing is now famously a part of their tradition. This is the east coast. But that doesn’t mean that Saratoga is a placed to be ignored. The first horse race at this historic site took place in 1847, 15 years before the American Civil War broke out. In 1999, Sports Illustrated ranked it among the top-10 sports venues in the United States.

The Little League World Series was first held in Williamsport in 1947 and has been a staple of the American summer ever since. While most of us only remember watching this event on television, it represents what is right about the United States. Young children playing a game of baseball in front of their parents with their whole lives in front of them. The smell of the summer grass. The sound of the ball off the aluminum bat. Pretty much every adult can relate to how awesome this is. Enjoy a game and stay for the amazing surroundings.

The Palestra in Philadelphia, Pennsylvania 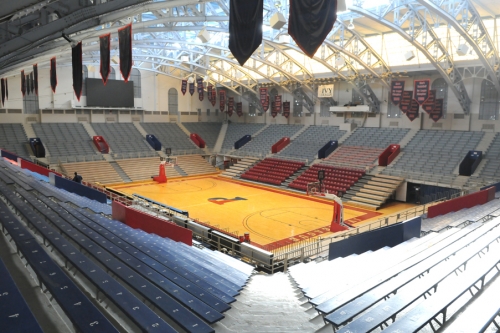 Probably the most famous of the unerrated sports venues, The Palestra has an extensive history within the ranks of college basketball. Called The Cathederal of College Basketball for a reason, this Philadelphia location has hosted more NCAA Tournament games than any other venue in the United States. It was the home of  the Philadelphia Big 5, which consisted of Penn, Saint Joseph’s, Temple, La Salle, Villanova…all of whom played their home games together at this arena. The Penn Quakers have played their home games here since 1927. 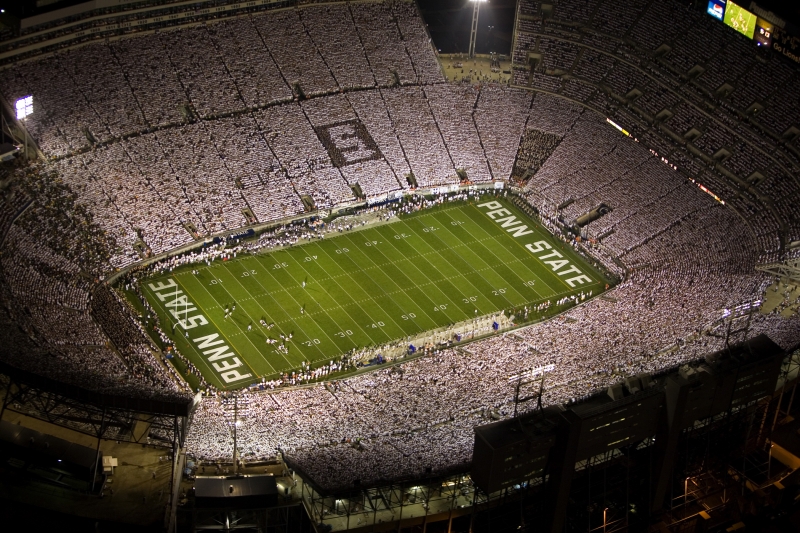 Home of the Penn State Nittany Lions since 1960, Beaver Stadium was actually erected back in 1909. Even though most people today connect Penn State to the Jerry Sandusky scandal, this football program has a heralded history of success. Besides, a Saturday afternoon crowd of over 106,000 for a game of college football. That’s amazing.

When the Pittsburgh Pirates closed out baseball at Three Rivers Stadium back in 2000, it was a bittersweet moment for the baseball city. But that was quickly overshadowed when this dynamic ballpark opened up in 2001. A modern marvel in every possible way, PNC Park is located in the North Shore side of the city and has a spectacular view of downtown Pittsburgh. Unlike some of the other modern stadiums, Pittsburgh did this right.

Does Fenway Park really need an introduction or explanation? Beginning in 1912, this stadium has been the site of some of the greatest moments in the history of baseball. The Boston Red Sox and Boston Braves both played here during the 1914 and 1915 seasons with the latter holding the World Series at Fenway in 1915. That’s a small part of history that many baseball fans don’t know. The likes of Babe Ruth, Ted Williams, Carl Yastrzemski and Carlton Fisk have all called Fenway home. It’s currently the oldest stadium in baseball.

Maybe not as well known as the Pro Football Hall of Fame and MLB Hall of Fame, the mecca of basketball greatness can be found where  basketball itself was founded back in 1891. It opened for business back in 1968 and has inducted the best of the best every year since. Checking out the architecture, one can easily come to the conclusion that this place is an amazing experience when visited.

The first of the modern stadiums, the Baltimore Orioles simply couldn’t have built a better ballpark to replace old Memorial Stadium. Oriole Park at Camden Yards opened in 1992 and has been a baseball cathederal ever since. The warehouses just outside the outfield walls is a representation of downtown Baltimore and started a trend of constructing stadiums in downtown locations. A trend that has since continued in San Francisco, Denver, Atlanta, Pittsburgh and Detroit, among other MLB cities. It also started MLB’s move away from multi-use stadiums. 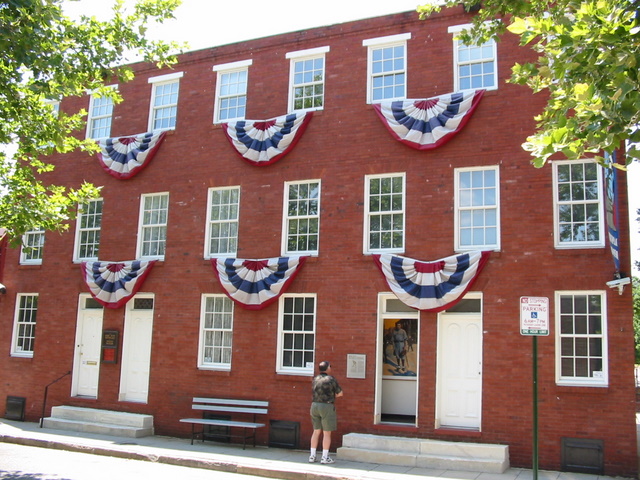 A six-minute walk from Camden Yards, the place where Ruth was born represents the life and times of the single greatest baseball player in the history of the game and an icon in these United States. What makes this museum so amazing is its down-home feel and all the amazing artifacts that defined Babe Ruth’s life and career. 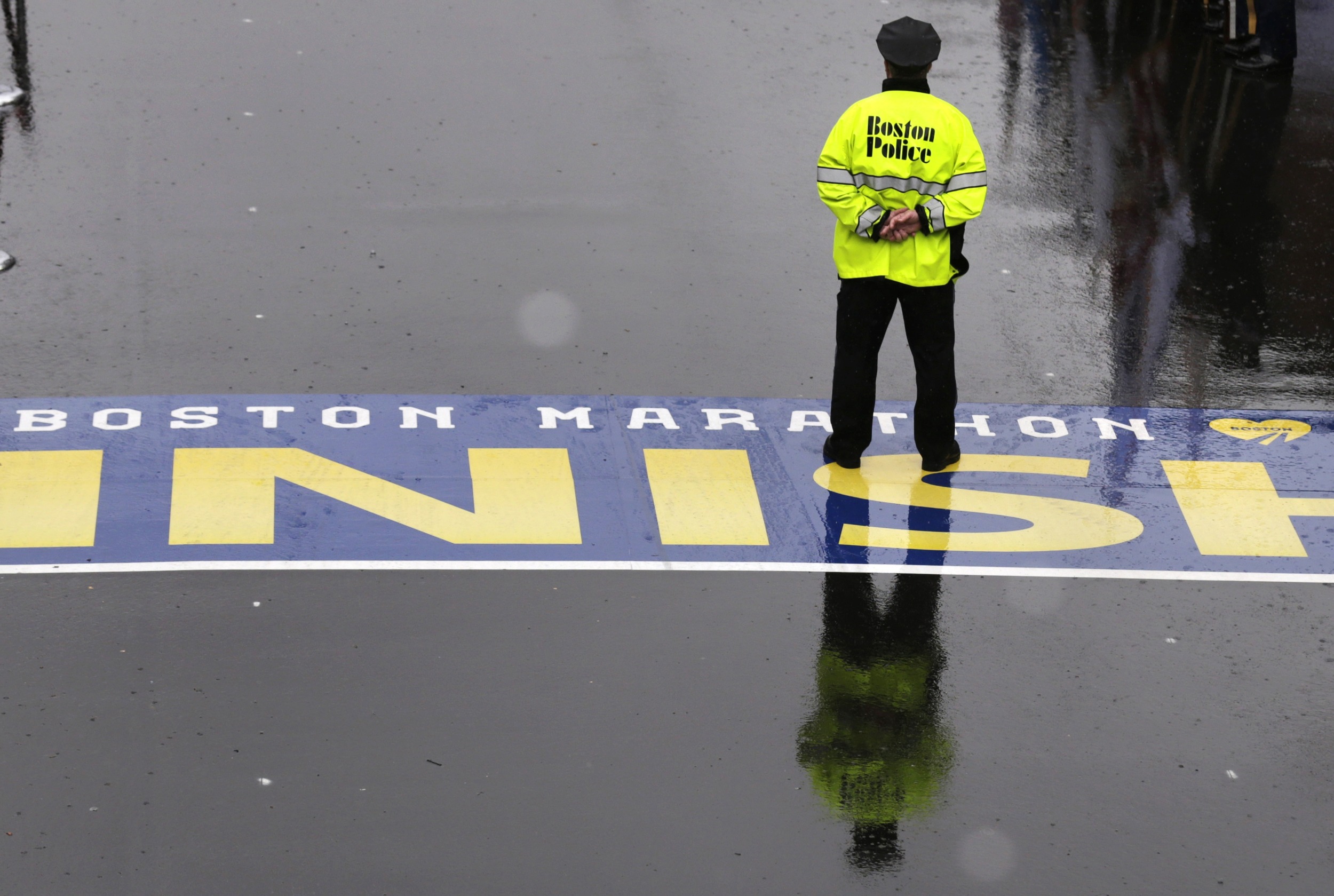 The first Boston Marathon was held in April of 1897 and has taken place each year on Patriots’ Day ever since. A holiday that celebrates the  Battles of Lexington and Concord during the American Revolution. A trek through downtown Boston, a city that many consider the birthplace of the American Revolution. It’s as historical from a national perspective as it is from a sports perspective. The Boston Red Sox host a day game on the day of the Boston Marathon every year. It’s a civic holiday in the state of Massachusetts. After the bombings in 2013, the Boston Marathon became a rallying cry for what is right about this nation. The first responders, the heroes and yes…baseball. Remember David Ortiz’s amazing speech at Fenway Park shortly after the bombing? That’s something that will go down in the history of baseball.

The Horseshoe in Columbus, Ohio 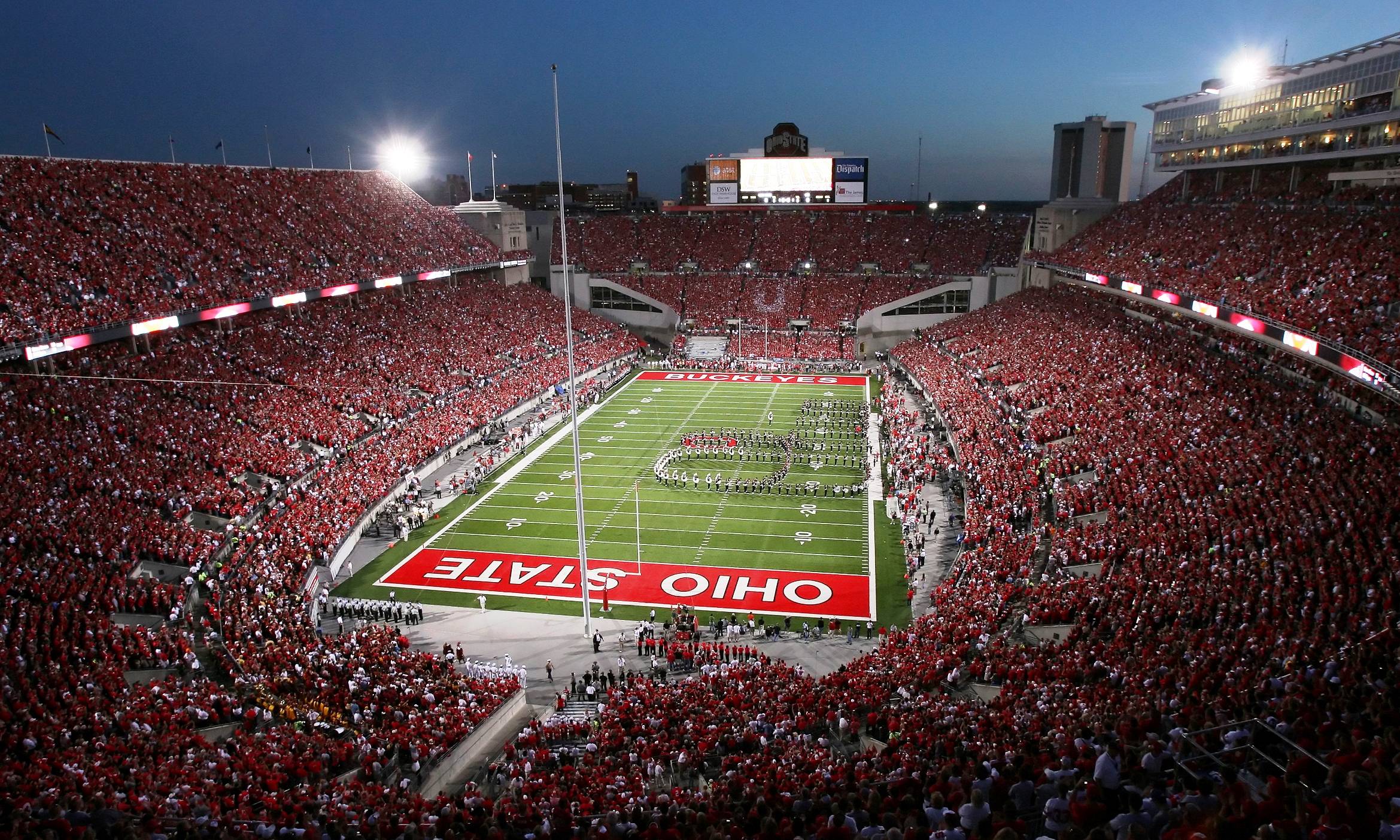 The Shoe opened in October of 1922 and has been synonymous with college football ever since. With a capacity of nearly 105,000, this amazing stadium represents college football Saturday to a T. In addition to hosting seven National Champion Ohio State football teams, this stadium has also played host to concerts ranging from Pink Floyd to U2.

The ONE place that all NFL fans must visit, Canton, Ohio is a representation of just how much the game of football has changed throughout the years. From the first class ever inducted into the Hall in the form of Joseph Carr and Jim Thorpe to the most recent class, this location boasts everything and anything throughout the history of the game. From the Canton Bulldogs, which was a professional football team founded in 1904, to the Hall of Fame game that will be played in August, Canton is football. Plain and simple.