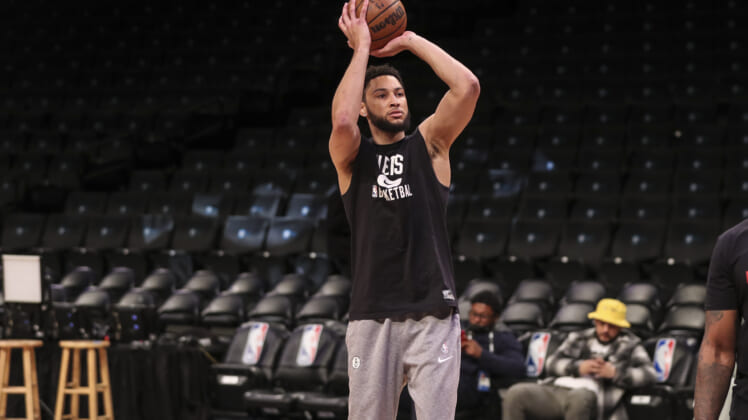 Star point guard Ben Simmons has yet to suit up for a game this season. He initially had issues with the Philadelphia 76ers organization — leading to Simmons sitting out the entire season before being dealt to the Brooklyn Nets.

Simmons, 25, was acquired from Philadelphia during the February 10 NBA trade deadline and has not suited up due to a back injury.

Now, with the Nets set to take on the Boston Celtics in Round 1 of the NBA Playoffs starting this weekend, there’s renewed optimism fom Ben Simmons himself that he might be able to suit up in this series.

ESPN’s Brian Windhorst (h/t Bleacher Report) indicated on Thursday that the expectation is Simmons will ramp up five-on-five scrimmages this week with the hope of returning for Game 4 of the series on April 25. Game 5 and Game 6 remains less optimistic outlooks for the star 25-year-old point guard.

To say that this could be a major boon for the Nets would be an understatement. Led by Kyrie Irving and Kevin Durant, they dispatched of the Cleveland Cavaliers in the play-in tournament to earn the seventh seed and a meeting with the red-hot Boston Celtics.

Impact on potential Ben Simmons debut for the Brooklyn Nets

As noted above, Irving has been playing at an absolutely high level. In the aforementioned win over Cleveland, the former NBA champion hit on his first 12 shots. With his scoring prowess and Simmons ability to distribute the ball, it would only make Brooklyn’s offense that much more lethal.

A former No. 1 pick, Irving played exceedingly well since making his season debut back on January 5. He’s averaging 27.4 points, 4.4 rebounds and 5.8 assists on 47% shooting in 29 games.

As for Kevin Durant, he just recently returned from a sprained foot and looks to be his old self.

As for Ben Simmons, it’s not yet known how many minutes he will play once the three-time All-Star ends up making his Nets debut in this playoff series. He last played a game as a member of the 76ers back on June 20 of 2021. His back injury continued to be an issue following the blockbuster trade to Brooklyn.

There’s also some question mover just how quick Simmons would be able to fit in with Irving and Durant. The three obviously have not played a game together since the February 10 trade.

Despite his obvious limitations shooting the ball, Simmons remains one of the best ball distributors and perimeter defenders in the NBA.