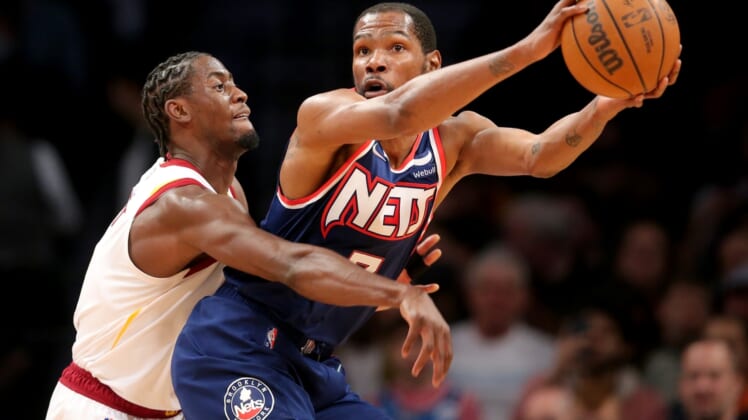 Kevin Durant scored 36 points as the host Brooklyn Nets used a big fourth quarter to survive blowing an early 17-point lead in a 118-107 victory over the Cleveland Cavaliers on Friday night in New York.

The Nets (43-38) moved into seventh place in the Eastern Conference. They share the same record as Cleveland (43-38) but won three of four meetings to claim the head-to-head tiebreaker.

Brooklyn won its third in a row by outscoring Cleveland 29-14 over the final 9:52 and 37-19 in the final 14-plus after trailing 88-81 late in the third. It was Brooklyn’s second straight impressive finish following Wednesday’s win over the crosstown rival Knicks.

Darius Garland scored 31 points for the Cavs but took a hard fall with 3:54 remaining when he collided with Irving. Lauri Markkanen added 17 and Evan Mobley also finished with 17 in his return from an ankle injury.

Cleveland dropped to 6-11 since losing former Brooklyn center Jarrett Allen to a fractured finger on March 6.

Durant scored 16 points as the Nets held a 34-19 lead through the opening quarter. Caris LeVert’s layup cut the deficit to 53-48 with 2:33 remaining but Brooklyn took a 62-54 lead by halftime on Durant’s 12-foot fadeaway with 6.7 seconds.