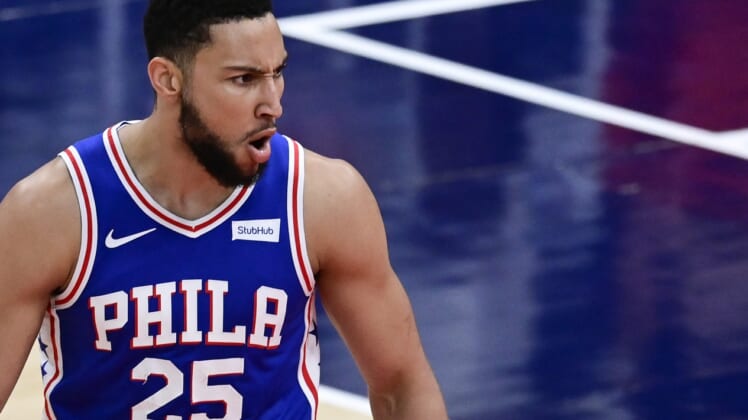 May 31, 2021; Washington, District of Columbia, USA; Philadelphia 76ers guard Ben Simmons (25) reacts after the basket during the first quarter against the Washington Wizards during game four in the first round of the 2021 NBA Playoffs. at Capital One Arena. Mandatory Credit: Tommy Gilligan-USA TODAY Sports

The NBA trade deadline is approaching and with the Philadelphia 76ers poised to keep Ben Simmons, it will likely cost the All-Star point guard millions of dollars.

Simmons requested a trade this summer, refusing to play another minute for the 76ers. He was allowed to stay away from the team, but his agent held a meeting with the organization in January to see if the standoff could be ended. Instead, the two sides remain divided to this day.

As the 25-year-old kept racking up absences, the fines piled up with each passing day. ESPN’s Ramona Shelburne reported Tuesday that Simmons has already been fined $19 million by the organization for “failing to render services” during the 2021-’22 NBA season.

Just over two years after signing a $177 million max contract extension with Philadelphia, Simmons is losing out on a majority of his salary for the ongoing season. It will get even worse if Philadelphia doesn’t trade him, with an additional $12 million in fines pending if he doesn’t take the court this season.

If the 76ers hoped losing out on $20-plus million would convince Simmons to rejoin the team, it isn’t happening. As one person close to Simmons told ESPN, he doesn’t care about the money.

“That’s not what this is. It’s hard for people to understand. But if you believe in what you’re doing and that this is not the right situation for you, and you’re trying to get to a better place, the money doesn’t matter. Obviously, it’s a financial hit. But you adjust.”

Source close to Ben Simmons on the mounting fines, via ESPN

But Simmons’ commitment to the holdout is matched by executive Daryl Morey’s insistence in trade negotiations. If another NBA team won’t send Philadelphia a superstar, the 76ers will keep Simmons past the trade deadline. Considering the Sacramento Kings backed out of negotiations, the next few months will likely prove costly for both the 76ers and Simmons. 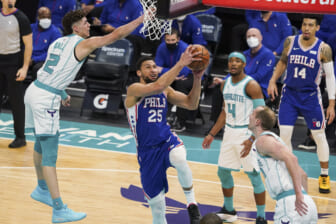 Also Read:
Ben Simmons trade to the Charlotte Hornets: 3 ways it could work