Philadelphia 76ers star Ben Simmons will reportedly never play for the team again, vowing to the organization that he will not suit up for a practice or game moving forward.

Simmons, who infamously cost his team the playoff series against the Atlanta Hawks, requested a trade weeks ago as the situation with the organization was beyond repair. Now, amid the 76ers taking a hard stance in negotiations, their former No. 1 pick is escalating things.

According to ESPN’s Adrian Wojnarowski, Simmons told the front office he intends to never play another game for the franchise. The 25-year-old already vowed to skip training camp, despite the fines, and now seems prepared to sit out games during the 2021-’22 NBA season if he isn’t traded.

Executives around the league saw this coming weeks ago. Reports surfaced in August that many NBA executives anticipated Simmons would threaten to sit out the upcoming season. The 76ers were already bracing to be without him during training camp, but thus far have refused to budge on their asking price. 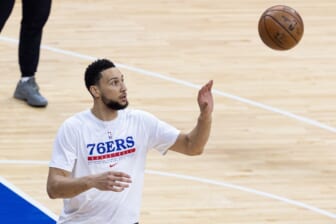 What do the 76ers want for a Ben Simmons trade?

The cost to pull off a Ben Simmons trade is viewed as sky-high among many teams. 76ers’ president of basketball operations Daryl Morey. Philadelphia either wants at least four future first-round picks and a potential All-Star-caliber player or a superstar like Damian Lillard.

Morey reportedly asked the Golden State Warriors, viewed as the best fit for Simmons, to send a package including James Wiseman, Andrew Wiggins, both the No. 7 and 14 picks in the 2021 NBA Draft and two additional future first-round selections.

The Sacramento Kings and Minnesota Timberwolves have also been engaged in negotiations with the 76ers. But Sacramento is unwilling to move its star point guard De’Aaron Fox nor promising guard Tyrese Haliburton. As for the Timberwolves, they made it clear Anthony Edwards and Karl-Anthony Towns are off the table.

Philadelphia opens training camp with its media day on Sept. 27 and everyone with the organization will be asked about Simmons. With all of the distractions this creates and the possibility of him skipping meaningful games, the 76ers might have no choice but to lower their price and trade him.