Bellator 282 in June will feature the return of reigning middleweight king Gegard Mousasi and the final two bouts in the quarterfinals of the promotion’s highly anticipated bantamweight Grand Prix.

On Tuesday, the organization announced that Mousasi (49-7) will make a quick title turnaround and jump back into the cage only four months after successfully defending his championship at Bellator 275 in February. The Dutchman’s seventh challenge as a two-time division champion will be another unbeaten rising prospect in top-ranked 185-pound fighter Johny Eblen.

Last month, “The Dreamcatcher” defeated Austin Vanderford in just under a minute and a half in their championship main event fight inside the 3Arena in Dublin, Ireland. Mousasi handed the American his first career loss by technical knockout after Vanderford began his career undefeated over 11 bouts. In eight appearances inside the Bellator cage, the UFC veteran has one lone defeat. A majority decision setback to Rafael Lovato, Jr. in June of 2019.

Eblen (11-0) made his promotional debut in March of 2019 and has won seven straight, with two coming by knockout. He beat former title challenger and middleweight top-five stalwart John Salter with a unanimous decision earlier this month.

Along with a middleweight title clash in the main event, bantamweight Grand Prix quarterfinalists Magomed Magomedov (18-2) and Leandro Higo (21-5) will also compete. Their opponents for the June 24 event will be determined by a pair of wild card bouts set to take place at Bellator 278 on April 22.

Magomedov will take on the winner of a fight between Enrique Barzola and Josh Hill, while Higo will face the winner of the scrap between Jornel Lugo and Danny Sabatello. 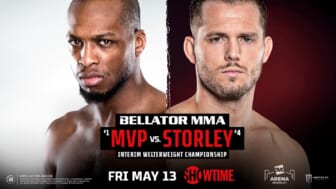