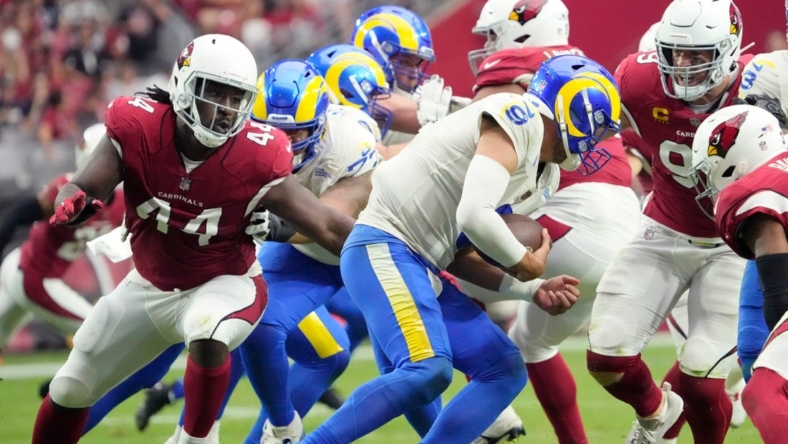 The Arizona Cardinals and Los Angeles Rams, two offensively challenged teams saddled with constant shuffling on the offensive line, will meet for the second time this season Sunday at SoFi Stadium in Inglewood, Calif.

It’s possible the Rams will be without quarterback Matthew Stafford, who is the concussion protocol, while Cardinals safety Budda Baker will miss at least this week’s game with a high ankle sprain.

The Rams’ backup quarterback is John Wolford, who made his only career regular-season start against the Cardinals on the final day of the 2020 season with the winner making the playoffs. The inexperienced Wolford helped his team win, 18-7.

The defending Super Bowl champion Rams are 3-5, with one of the victories over the Cardinals (3-6) in Week 3 in Arizona. Each team has lost four of their last five games and there appears to be no way out of the offensive doldrums. The Rams are 1-2 in NFC West games while the Cardinals are 0-3.

After nine games last season, the Cardinals were 8-1 and had scored 30 or more points seven times on the way to an 11-6 season. One of those wins was over the Rams, 37-20. However, Arizona’s injury woes struck hard in the second half of the season when they scored at least 30 only twice, lost four of their last five games and were then embarrassed by the Rams 34-11 in a wild-card playoff game.

That Cardinals win in early October 2021 is the only time the team has defeated the Rams with Sean McVay as head coach in 11 regular-season meetings.

While this week the popular narrative is to focus on the alleged regression of quarterbacks Kyler Murray and Matthew Stafford, the reality is that the combinations up front have been a revolving door and have affected overall productivity for both teams.

The Rams had the same starting offensive line in 16 of 21 games last season, but this year they have already had seven different line combinations with 11 different starters — including five at right guard. The retirement of left tackle Andrew Whitworth began a spiral that has resulted in four linemen currently on injured reserve — including Whitworth’s replacement, Joe Noteboom, who is out for the season with a ruptured Achilles.

The interior of the Cardinals offensive line has been ever changing with the most notable absences being left guard Justin Pugh (knee), who is out for the season, and center Rodney Hudson (knee), who has missed the last five games and isn’t expected to play Sunday.

Right guard Will Hernandez, who has started every game, went out early last Sunday against Seattle with a pectoral injury and was placed on IR on Wednesday. Arizona will start its seventh different line combination (also with 11 players), but it’s unknown who will be Hernandez’s replacement. It could be Sean Harlow, Max Garcia, Lecitus Smith or even Josh Jones — who is a better tackle than guard.

The team also claimed Wyatt Davis on Wednesday one day after he was cut loose by the New Orleans Saints.

Whoever is at right guard, that player, along with center Billy Price and left guard Cody Ford, will have their hands full going against Rams superstar Aaron Donald.

Said coach Kliff Kingsbury: “Every game film you watch, he’s wrecking people’s game plans regardless of what type of plan they have for him, so we will have to make sure we know where he is at on every snap.”

The Cardinals rank last in the NFL in yards per play on first down at 4.38 while the Rams are 29th at 4.95. That often sabotages an offense because of too many second- and/or third-and-longs.

As Rams coach Sean McVay said, “The challenging thing is that we’ve obviously had a lot of injuries centralized to certain spots. I do see positive glimpses, (but) it’s just about the consistency and the sustainability through four quarters. There’s enough stuff that isn’t going the way that we want, that you can’t just say, ‘Hey, we’re just this one thing away from being able to get it fixed.'”