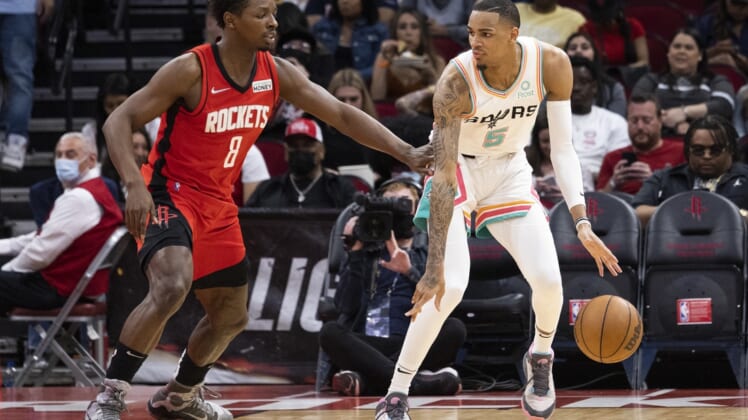 Dejounte Murray scored a career-high 33 points and added 11 assists and seven rebounds as the San Antonio Spurs capped a sweep of their four-game road trip with a 123-120 victory over the Houston Rockets on Monday.

The Spurs (30-44) climbed within one game of the idle Los Angeles Lakers for the last spot in the Western Conference play-in tournament.

Houston trailed by as many as 16 points before pushing the Spurs to the final buzzer.

The Rockets got within three points in the third quarter before the Spurs built the margin back to 15. Houston’s Jalen Green closed the period with a 3-pointer to slice the margin to 96-84.

Kenyon Martin Jr. and Josh Christopher nailed 3-pointers down the stretch as Houston got within 121-120 with 9.6 second to go. Two Murray free throws extended the gap to three with 8.4 seconds left before Martin had his game-tying attempt from behind the arc rim out as the final buzzer sounded.

Green led Houston with 30 points while Kevin Porter Jr. added 26 points, nine boards and seven assists. Christopher chipped in 20 points, six rebounds and six assists in 30 minutes off the bench for the Rockets, who had won three of their previous four games.

Alperen Sengun scored 12 for Houston, and Jae’Sean Tate had 10.

The Rockets finished 20 of 49 from behind the arc, the fifth time they made 20-plus 3-pointers this season. The Spurs made only 7 of 29 attempts from beyond the arc.

The Spurs head home to face the Memphis Grizzlies on Wednesday, the same night the Rockets will play the first of back-to-back home games against the Sacramento Kings.