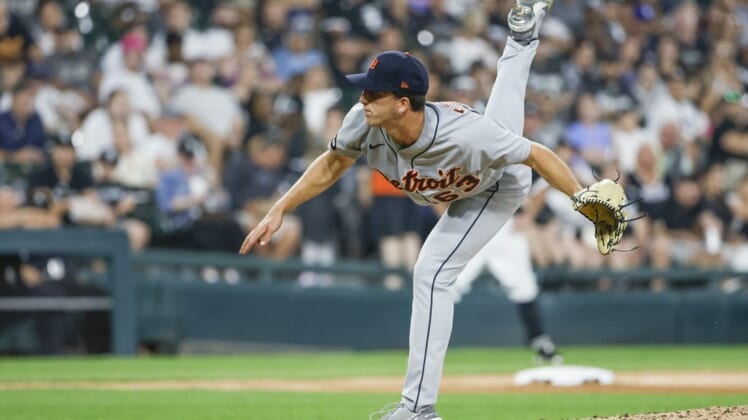 Brieske (2-6), who entered his 14th career start with a 4.54 ERA, didn’t yield his first base runner until Josh Harrison’s third-inning walk, and Chicago’s initial hit until the sixth — also from Harrison. The right-hander also yielded a single to Jose Abreu in the seventh, when he left with one out.

Those were the only runners Brieske allowed while striking out four for the Tigers, who also got a two-out, pinch-hit RBI single from Spencer Torkelson in the ninth to snap a five-game skid to the White Sox. Detroit’s Gregory Soto allowed an RBI double to Luis Robert in the ninth, but with runners on second and third and one out, fanned Abreu and got Eloy Jimenez to ground out.

Baez, back in Chicago for the first time since the Cubs traded him to the New York Mets nearly a year ago, hit a Dylan Cease off-speed pitch over the left-field fence to open the fourth inning. It was Baez’s eighth home run of the season and first since June 24.

Cease (7-4), who entered this contest 10-0 with 1.91 ERA in 11 career starts versus Detroit, was tough once again on Chicago’s AL Central foe. Aside from the Baez homer, the right-hander yielded two other hits with three walks and struck out eight over six innings and 101 pitches.

A walk to Harold Castro and single from Jonathan Schoop put Detroit runners on first and third with nobody out in the second. However, Cease fanned the next three hitters to get out of the jam.

But the Tigers eventually needed only one swing to get on the board via Baez’s homer, two innings later, off Cease, who made him look bad during a first-inning strikeout. The White Sox have lost three of four overall, and seven of nine at home.