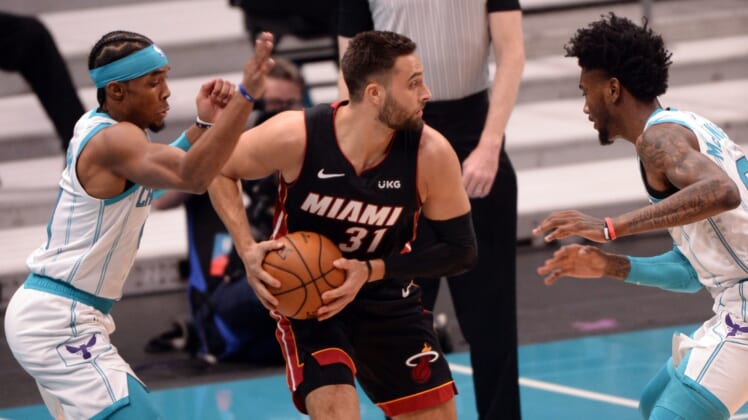 Bam Adebayo scored 20 points to go with 10 assists as the visiting Miami Heat defeated the Charlotte Hornets for the first time in three meetings this season, winning 121-111 on Sunday night.

It was a key outcome for the Heat (35-30) as they jockey for playoff position with the Hornets (31-32) in the Eastern Conference.

The Hornets were trying to win for the second night in a row since the return to action of guards LaMelo Ball and Malik Monk, who had been out with injuries.

Kendrick Nunn poured in 19 points and Jimmy Butler and Goran Dragic each added 18 points for the Heat. Dewayne Dedmon had 14 points and Duncan Robinson supplied 10 points as Miami won its third game in a row. Butler had eight rebounds and eight assists.

Ball, who missed all three of his 3-point attempts, ended up with 14 points and five assists but he was charged with five of Charlotte’s 14 turnovers. Monk had 11 points in a reserve role.

P.J. Washington led Charlotte with 21 points, while Miles Bridges chipped in 15 points, Terry Rozier had 14 points and Jalen McDaniels notched 12 points. The Hornets lost for the third time in their past four games.

Devonte’ Graham, who missed Saturday’s game because of a knee contusion, was back for the Hornets and provided nine points and five assists off the bench.

The Heat pulled away from a 65-58 halftime lead with a big third quarter despite Charlotte closing within two points by posting the first five points of the quarter.

It was 100-80 after three quarters with Miami posting its second 35-point quarter of the game, scoring nine of those points on free throws. The Hornets didn’t connect on a field goal for the last 4 1/2 minutes of the third quarter.