Bam Adebayo’s case for 2021 Defensive Player of the Year

Bam Adebayo is arguably the best defender in the entire NBA. Here is why Adebayo should win the NBA's Defensive Player of the Year award in 2021. 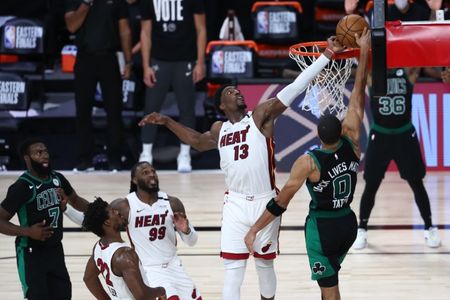 Bam Adebayo said it himself in a post-game interview with TNT after the Miami Heat’s playoff-clinching win against the Boston Celtics: “I do everything on defense.” Adebayo is not wrong and arguably can make a good case for him being the best defender in the NBA.

Rudy Gobert, Ben Simmons, and Giannis Antetokounmpo all have their own amazing qualities as defenders, but none match up to what Adebayo can put up on a nightly basis against the league’s best.

Here is why Adebayo should be the NBA’s Defensive Player of the Year for the 2021 season.

Bam Adebayo locks up star players on a nightly basis

Bam Adebayo has been known to lock up star players ever since the world saw how he guarded Stephen Curry in his rookie season. The special qualities were already there from the start and all he had to do was put it together.

Three seasons later and Adebayo has turned into the Heat’s superstar defensive player and one of the best defenders in the NBA. For example, here are some star players defended by Adebayo this season.

These are absolutely ridiculous numbers for Adebayo as this list of players includes the likes of Curry, James, and Antetokounmpo. It includes perennial All-Pro players who are normally on the First Team.

If you watch Adebayo play, these statistics should not surprise you in the slightest. Let’s compare the numbers to Simmons, who has been boasted as the other player against Gobert for the Defensive Player of the Year. Some players were replaced to make it fair by quantity.

By a quick glance at the numbers, Simmons’ defensive statistics by player are nowhere close to Adebayo. Out of the 10 players who have shot over 10 field goal attempts against Simmons, four of those players are shooting 50% or higher from the field.

On the other side, out of the 16 players who have shot over 10 field goal attempts against Adebayo, four of those players are also shooting 50% or higher. Similar numbers, but six extra players for Adebayo still yields the same results.

Bam Adebayo can guard 1-5 on defense with few issues

Adebayo has been able to guard the 1-5 positions throughout his entire career. An argument can be made that defending centers is his weakest link, but it is not a horrendous look for him.

Nikola Jokic is shooting 6-of-13 (46.2%) and Nikola Vucevic is shooting 8-of-17 (47.1%) against Adebayo this season. The same cannot be said for Simmons because he hasn’t defended a single center that has shot the ball five times unless you are counting Domantas Sabonis.

Not only does Adebayo defend guards at a better clip, but he also has the responsibility of guarding centers every night. The defensive load is on Adebayo’s shoulders more than Simmons and he still has better statistics.

Yes, there are game plans to switch off the team’s best defender, but when put up to the task, Adebayo will have Simmons number on defense every single time. The argument shouldn’t be about Simmons because if you dive deep, it’s obvious.

If someone were to make a case about Gobert, that’s a different story, because he doesn’t have the ability to guard the 1-5 positions. But, if we are talking about the Defensive Player of the Year, why isn’t this considered more?

Sometimes, if it feels like the Defensive Player of the Year could be decided based on casual statistics like blocks and steals. Gobert averages a league-high 2.7 blocks per game and has a different type of defensive ability than Adebayo.

Gobert can shut down the paint, but when put on an island against the likes of Curry, there’s nothing he can do to stop the feeling of his sloppy footwork. Instead, he only does a few things extremely well, while Adebayo can do everything well.

Granted, Gobert is definitely better than Adebayo at defending the paint, but this should make the discussion on the Defensive Player of the Year award different. What is truly the purpose of the award?

While the Defensive Player of the Year award could be media-driven, Adebayo didn’t truly boost his case like Simmons and Gobert until the Heat clinched a spot in the 2021 NBA Playoffs.

If the Defensive Player of the Year award isn’t based on box score statistics like blocks and steals and focuses on more all-around play, Adebayo should run away with the award. But, that most likely won’t happen this year.

Instead, Gobert will most likely win the award for a third time at the end of the season and there’s no question he would deserve it. But, the thought process of the award should be different moving forward.

An organization, coach, and teammate would prefer a player who can guard the best players in the world every night. The Heat know this and love what they have in Bam Adebayo, whether he wins the award or not.