Baltimore Orioles: Manny Machado is Anything But a Man

In between the foul lines of a baseball diamond, a wooden bat is considered a tool. In this case, a tool used a wooden bat to prove…well nothing.

Baltimore Orioles’ third baseman Manny Machado was ejected from Sunday’s game against Oakland when he began to swing at a pitch, missed, then let go of his bat (or as Machado said “it slipped) sending it down the third base line towards Alberto Callaspo. However, Callaspo was not the target for the flinging lumber; A’s pitcher Fernando Abad was.

Machado hit catcher Derek Norris with his bat at the beginning of the game and nobody was surprised when Abad seeked revenge. The altercation cleared the benches, and he was ejected in addition to Abad.

Obviously, social media had a lot to say about it. 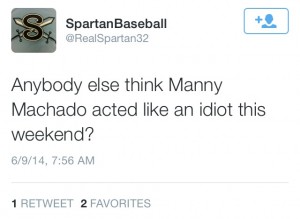 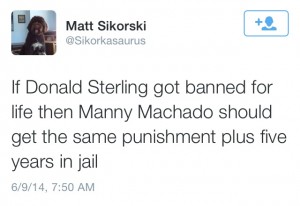 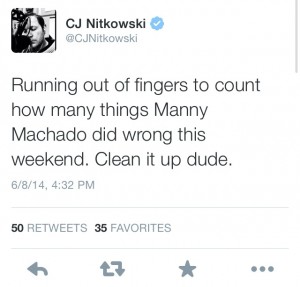 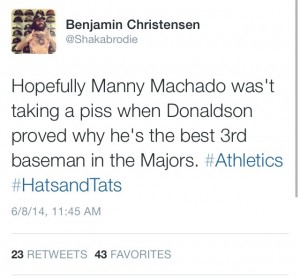 I’m not quite done yet. 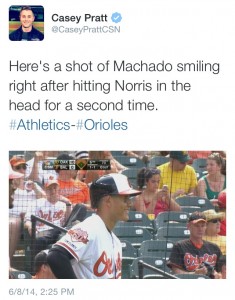 The Oakland/Baltimore series has had some trouble stirring around it, and it all seems to be centered around the 21 year old. Recently, he had a scuffle with Oakland A’s third baseman Josh Donaldson after a “strong tag occurred” which, once again, was pointless and immature of Manny.

It’s understandable that Machado is a 21 year old newbie to the Bigs, and thanks to him last season, a lot of fantasy team owners considered him fantasy baseball gold, but that is no excuse. Like I said, understandable, but inexcusable.

It’s a professional sport and it seems Machado is not quite understanding that. If he had used that bat outside the foul lines, it would be a completely different story.

Manny Machado presumably is going to be suspended, and here's what the baseline should be. http://t.co/CIqEKodn7V Tigers' pen/notes/links.