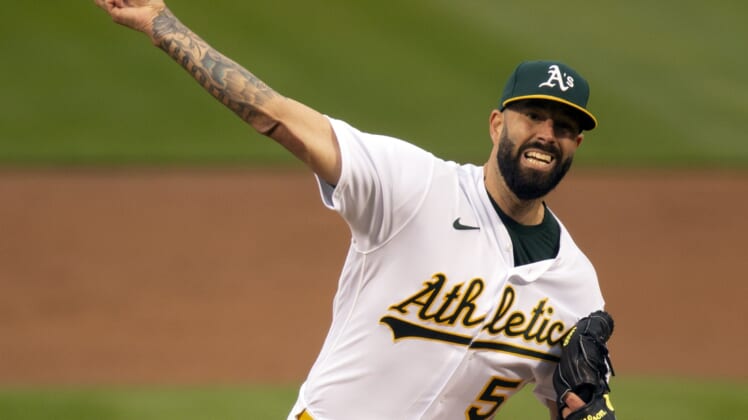 Left-hander John Means pitched seven strong innings to cap a stellar month as the Baltimore Orioles began a Western swing with a 3-2 victory over the host Oakland Athletics on Friday night.

In beating the A’s for the second time in six days, Means (3-0) gave up two runs on three hits. He struck out nine and walked one.

Means finished the month with a 1.70 ERA, the second-best mark ever for an Oriole with six or more starts in April. Dave McNally holds the record with a 1.68 ERA in 1973.

Cesar Valdez pitched out of trouble in the ninth inning for his sixth save.

After Baltimore relievers Paul Fry and Travis Lakins worked around two walks in a scoreless eighth, Valdez served up inning-opening singles by Sean Murphy and Matt Chapman in the ninth.

However, the right-hander retired the next three batters, one on a line drive and two on fly balls, to preserve Baltimore’s second win in four games against Oakland this season.

All the Athletics’ scoring came on solo home runs by Murphy in the second, his fourth of the season, and Mitch Moreland in the seventh, his third.

In between, the Orioles went up 2-1 in the third on back-to-back homers by Cedric Mullins and Austin Hays, their fourth and third, respectively, of the year.

Baltimore extended the lead to 3-1 against A’s starter Mike Fiers in the fifth, scoring on an infield out by Mullins after Chance Sisco opened the inning with a single and advanced to third on a double by Ramon Urias.

Making his first start of the season after having dealt with pain in his back and side during spring training, Fiers (0-1) went six innings, allowing three runs and six hits. He walked two and struck out three.

Murphy and the Orioles’ Ryan Mountcastle were the only multi-hit batters in the game with two apiece. Baltimore out-hit Oakland 8-5.