Baltimore Orioles’ 3B Manny Machado Should be Suspended

The minute that your actions on the diamond as a baseball player starts to impact the safety of others involved in the game, is the exact moment you shouldn’t be playing the game. This is exactly what the umpires calling the Baltimore Orioles-Oakland Athletics game decided on Sunday afternoon.

In the eighth inning of a 10-0 game, A’s reliever Fernando Abad threw low and in at Baltimore Orioles third baseman Manny Machado. This seemed to be in response to the Orioles throwing at Josh Donaldon’s head following an incident between the two on Friday night. If you remember correctly, Machado took exception to a hard tag put on him by the A’s third baseman. The benches cleared, but everything seemed to calm down. 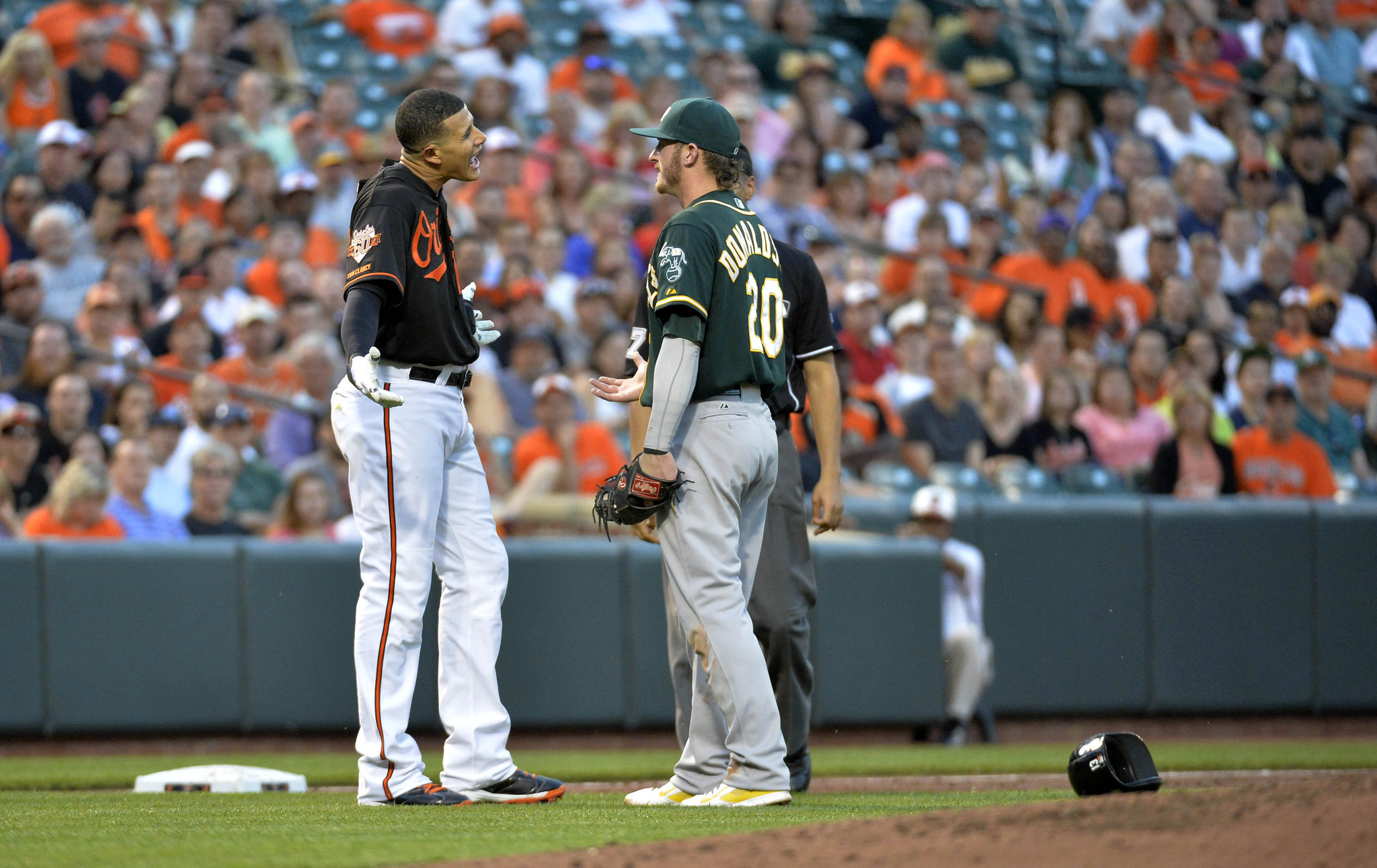 Courtesy of the Baltimore Sun: The bat-throwing incident comes two days after Macahdo and Donaldson got into it.

For one day at least.

Following Abad’s obvious wake-up call, which was directed at Machado, the young slugger seemed to throw his bat in the direction of the A’s pitcher. The bat landed harmlessly between Alberto Callaspo and an ump, but that’s not necessarily the point. The damage that it could have done is real and should not be ignored by MLB officials.

If that’s not intentional, I am not sure what is. A bat flying at that speed would do some serious damage if it hit a fielder. Machado’s frustration is real and understandable, but there is no place in the game for this crap.

The question now becomes whether MLB will step in.

Not a lot of penalty precedent for a hitter throwing his bat. Here's one example, from the 1972 ALCS: Campy. http://t.co/eDTbj0656A

This incident happened in Game 2 of the 1972 ACLS. Bert Campaneris was suspended for the remainder of the series and the first seven games of the 1973 regular season. He was, however, allowed to play in the World Series that season.

While the incident involving Machado wasn’t quite as obvious, you’d have to be a complete stooge to believe that he didn’t mean to throw the bat. After everything that happened in the series prior to that one at-bat, it goes without saying what Machado’s intent was.

For this, he should be suspended a minimum of 10 games. Again, there is no place in the game of baseball for this. Once you start putting the safety of other players at risk, you don’t belong anywhere near a baseball diamond. More than that, Machado seriously needs to get a grasp moving forward this season. If not, we could very well see a similar situation play out when these two teams tangle in Oakland immediately after the All-Star break in mid July.