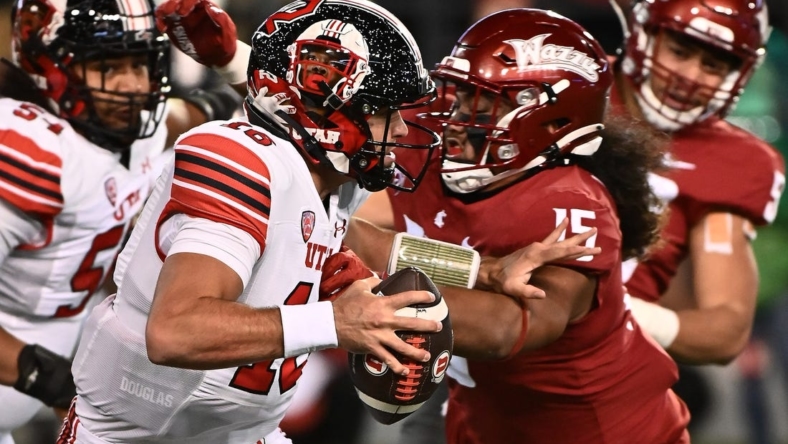 No. 14 Utah prevailed 21-17 against Washington State on Thursday in Pullman, Wash., despite starting quarterback Cam Rising being a late scratch because of a left knee injury.

Bryson Barnes made his first career start in place of Rising, who was in uniform but remained on the sideline.

Barnes completed a touchdown pass and was not intercepted in his 17-of-27 passing performance. He threw for 175 yards and also ran for 51 yards on eight carries.

On third-and-9 at the Washington State 43, Barnes kept the driving going completing a 10-yard pass to Devaughn Vele with 2:59 left.

The Cougars burned their last timeout with 2:27 remaining.

Utah ran the clock to 55 seconds left before calling a timeout with the ball at the Washington State 30.

Barnes attempted a pass on fourth-and-7 and the Cougars were called for defensive holding, securing the first down and the victory for the Utes.

The Cougars opened the scoring with 13:24 left in the second quarter on a 29-yard touchdown pass from Cameron Ward to De’Zhaun Stribling.

Ja’Quinden Jackson scored on a 6-yard run and Jaylon Glover a 1-yard run before halftime to put the Utes ahead 14-7.

Jackson and Glover, both freshmen, got the bulk of the carries with Utah’s leading rusher Tavion Thomas (414 yards this season) out for an undisclosed reason.

Glover finished with 76 yards on 20 carries and a touchdown, and Jackson ran 10 times for 43 yards.

Barnes built the lead to 21-7 with a 5-yard touchdown pass to Dalton Kincaid with 1:24 remaining in the third quarter.

Washington State answered quickly going 72 yards on six plays in 1:53, capped by Ward’s 6-yard scamper for the score with 14:17 left.

Ward completed 27 of 31 pass attempts for 222 yards. He was not intercepted.

Jackson fumbled and Washington State’s Tanner Moku recovered at the Utah 37 with 8:01 remaining.

The Cougars stalled after driving to the red zone, eventually settling for Janikowski’s field goal that cut the lead to four.