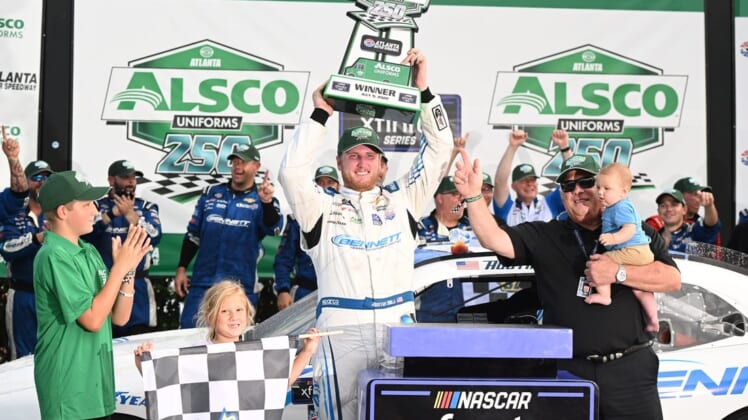 Radio trouble prevented driver Austin Hill from being able to speak to his Richard Childress Racing crew during the NASCAR Xfinity Series race Saturday afternoon at Atlanta Motor Speedway, but he sure understood the final hand signal.

The Georgia native, 28, won at his hometown track for the first time in his NASCAR career, holding off JR Motorsports driver Josh Berry by a mere .111 seconds. It was the closest Xfinity Series race finish in track history and another fitting number nod to Hill’s finish.

His 73 laps led in the No. 21 RCR Chevrolet was most on the day and the most of his young Xfinity Series career.

“Man, look at this crowd, I love the fans,” a smiling Hill said looking toward the loud and enthusiastic grandstands. “What a car. Man, RCR has been working their ever-loving tails off to give me a car that will race really fast.”

Hill was so impressed and appreciative of the work of his crew, particularly to win on a day it had to overcome a major challenge. He came down pit road on the pace laps once the team realized his radio didn’t work. Hill could hear the crew, but they could not hear him.

Even a new helmet didn’t solve the problem, so he spent all of the eventful 163 laps around the 1.54-mile speedway listening only. They worked out hand signals for adjustments he wanted during the pit stops.

There were 17 lead changes in the race. Hill took the lead for good on a restart with 48 laps remaining and held off Berry, Ryan Truex, Daniel Hemric and Tyler Reddick – sure that they would try to pass him in the final lap.

The frontrunners got dicey as expected, but Hill was able to pull away and was never challenged heading to the checkered flag to take his second series victory in 2022.

That 10th-place finish marked a solid comeback for Kaulig Racing’s Allmendinger, who led the championship standings by a mere nine points going into the Atlanta race. A tire problem and slow pit stop put him down two laps in Stage 2, and it proved to be a long, challenging day for Allmendinger who methodically worked his way forward.

At one point, he briefly lost the championship lead to Ty Gibbs.

But Gibbs, Saturday’s polesitter, had his own problems. Racing hard with Herbst at the front on a restart for the final stage, Gibbs’ No. 54 Joe Gibbs Racing Toyota hit the wall hard and suffered enough damage for him to take a DNF.

A four-race winner, Gibbs went into the race trailing Allmendinger by only nine points, but now he’ll go to New Hampshire for next week’s race 29 points out of the championship lead.

“We had a very fast Supra, we had a good car,” Gibbs told PRN Radio. “The 98 (Herbst) slid up and wasn’t clear and hooked us in the left front. It was hard racing and I just came home on the wrong side of it.”