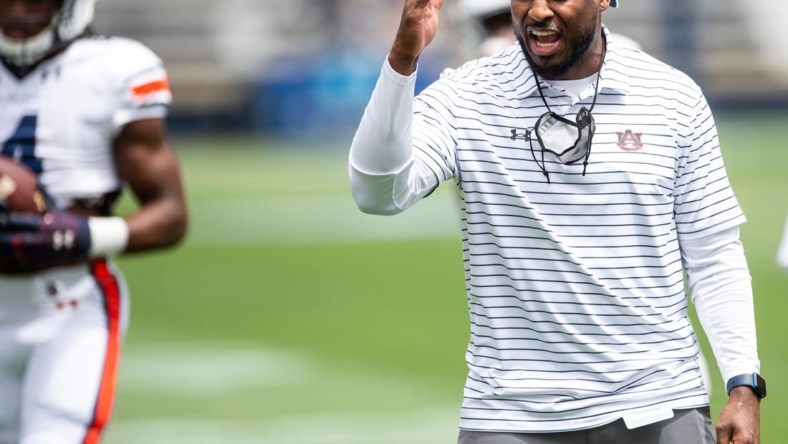 Cadillac Williams, a former Auburn standout running back, will serve as interim head coach for the first time at Jordan-Hare Stadium on Saturday night when the Tigers host Texas A&M in a game of two struggling traditional powers.

Both teams are 3-6 overall and 1-5 in the SEC and on five-game losing streaks.

Williams, who took over for Bryan Harsin after he was fired last week, has worked as an assistant at his alma mater since the 2019 season.

Auburn is coming off a 39-33 loss in overtime at Mississippi State in Williams’ debut as the interim head coach. The Tigers erased a 21-point deficit in the first half to get back into the game.

“I’m going to hold it together,” Williams said when asked about walking into Jordan-Hare Stadium on Saturday. “You can’t make this up. Honestly, I don’t know how I’m going to feel.

“I do know I have a job to do, to get this team ready to play and get these guys prepared and lead these guys.”

Auburn also lost five straight games to end the 2021 season, putting Harsin on the hot seat from the start of this season.

Texas A&M, projected by media to finish second in the SEC West, has lost five straight games for the first time since 1980.

“There is (a lot left to the season). Our kids see it,” Texas A&M coach Jimbo Fisher said. “We’ll play hard. We’ll practice hard. We’ve been doing that.

“Like I say, play these last three games … Auburn is a tough place to play, (and then) come back for UMass and LSU — two home games for these seniors. Play our tails off. The character of these guys, they’ll play, I know that. We’ve just got to do a better job for them.”

The offenses for Auburn and Texas A&M rank in the lower half of the SEC.

Auburn is relying on freshman Robby Ashford to lead its offense. He has completed 98 of 195 passes for 1,374 yards and five touchdowns, with five interceptions.