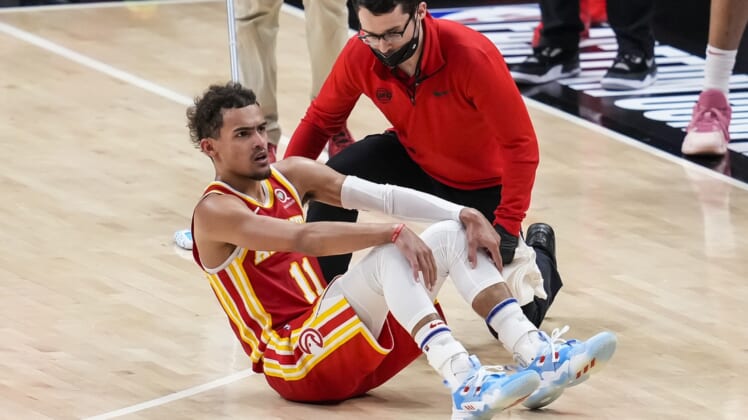 Jun 27, 2021; Atlanta, Georgia, USA; Atlanta Hawks guard Trae Young (11) is attended to after injuring his foot by accidentally stepping on an official’s foot against the Milwaukee Bucks in the second half during game three of the Eastern Conference Finals for the 2021 NBA Playoffs at State Farm Arena. Mandatory Credit: Dale Zanine-USA TODAY Sports

Atlanta Hawks star Trae Young is headed for an MRI on his sprained right ankle.

The Hawks lost Game 3 to the visiting Milwaukee Bucks 113-102 in their Eastern Conference finals series on Sunday night, but they hope they have not lost Young for Game 4 on Tuesday, also in Atlanta. The Bucks lead the series 2-1.

Young said he would undergo an MRI on Monday. 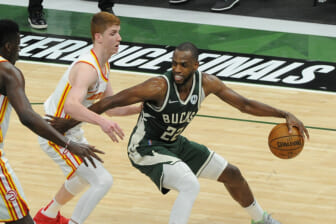 He suffered the injury when he stepped on an official’s foot late in the third quarter.

Young had made a pass near the 3-point line and took a step back when he inadvertently got too close to the official. Young sat on the court for a few moments before hobbling to the locker room with 29.3 seconds left in the third quarter having scored 32 points.

He returned to the court with 8:44 left in the fourth quarter but wasn’t able to regain his effectiveness, hitting only one 3-pointer the rest of the way.

“It’s hurting, it’s frustrating …” Young told reporters after the game. “I got some treatment on it. I’m gonna go get some more in the morning. That’s all I can do right now, is get treatment. 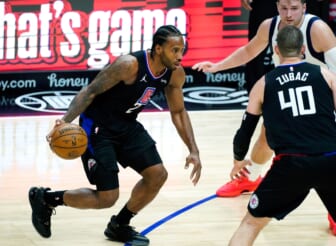 “When I came back in, it was just kinda sore. It made me mad; I couldn’t really go as fast as I wanted to. And when I did, it hurt.”

“That’s a big part of my game is my ability to blow by anybody. When you’re on the left side and you’re trying to blow by, you’ve got to use your right foot.”

“I’m going to get as much treatment as I can,” Young said.