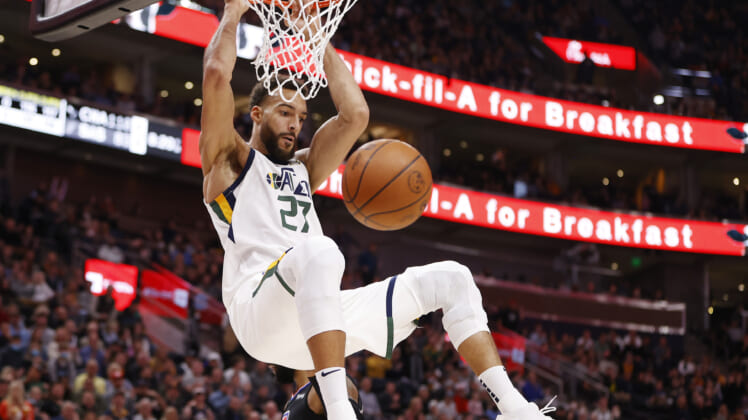 Most of the Atlanta Hawks roster is reportedly up for grabs this summer, and some of them could be used in a trade for Utah Jazz star Rudy Gobert.

This season was a disappointing one for the Hawks. After reaching the Eastern Conference Finals in 2021-2022, they barely reached the NBA Playoffs this season with the same roster and were swiftly eliminated in the first round.

The assumption throughout the league is that the Atlanta roster will be overhauled in a major way and nearly every player is available this summer. On Tuesday, Bleacher Report NBA insider Jake Fischer confirmed that is pretty much the plan, and the only untouchable talents on the roster are two-time All-Star Trae Young and forward De’Andre Hunter, who is expected to get a new long-term contract from the team.

Related: Sportsnaut NBA mock draft – Projections for every pick in Round 1 & 2

After that, all bets are off, and one player the Atlanta Hawks could target is Utah Jazz center Rudy Gobert. The Jazz also is expected to make notable changes after being bounced in the first round of the playoffs, and Gobert is their biggest trade chip.

The reason a deal between the two sides is a strong possibility is that Utah President Danny Ainge is a fan of Clint Capela, and allegedly tried to trade for him in 2019 when he was on the Rockets, and Ainge led the Celtics front office.

3 possible trades that send Rudy Gobert to the Atlanta Hawks

One key detail Fischer mentioned on Tuesday was that there are already rumblings around the NBA of what players could be involved in a swap for Gobert.

“There has been plenty of talk among league personnel that some combination of Capela, John Collins, Kevin Huerter, and the No. 16 pick could be routed to Utah for the three-time Defensive Player of the Year,” Fischer wrote.

Let’s assume Capela is included in any trade — since he is a strong replacement for Gobert — here are a few trade ideas between the Hawks and Jazz. The first would be the defensive anchor being swapped for Capela, John Collins, and the 16th pick in the 2022 NBA Draft. In this deal, the Jazz bolsters their frontcourt with a sound replacement at the five and young four with upside to cover Donovan Mitchell’s defensive six.

The second possibility sees the Hawks shipping off Capela, Kevin Huerter, and the 16th selection in June. Huerter was a strong bench contributor for Atlanta last season and could give the Jazz a dynamic bench one-two punch in Huerter and Jordan Clarkson. 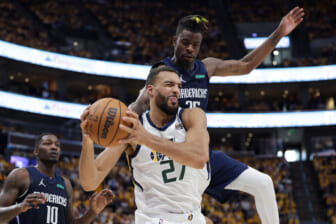 Another deal for Rudy Gobert would include Capela, guard Bogdan Bogdanovic, and the same pick. The Jazz could feel the other two packages aren’t as impactful for such an important player and want more. Bogdanovic is a proven scorer in the league but there are questions about his return from a knee injury. However, adding him to a starting back court with Mitchell or as a serious six-man of the year contender would be a notable boost for the Hawks’ offense in 2022-2023.