Dallas Mavericks in on Rudy Gobert trade: 2 scenarios to make it work 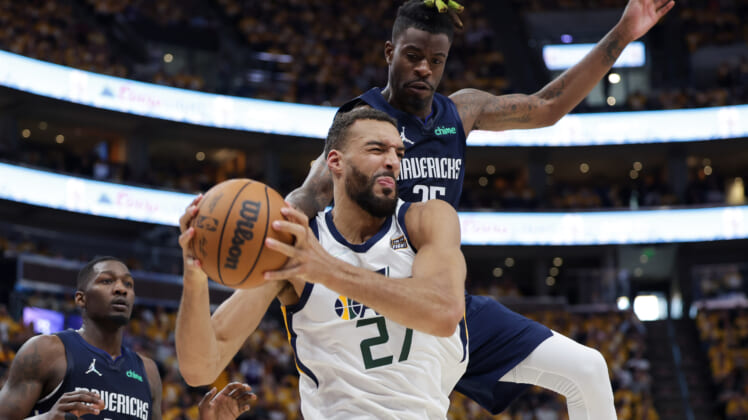 The Dallas Mavericks are surprisingly one of multiple teams in on a potential Rudy Gobert trade.

We say surprising given the fact that most figured Dallas would be looking for a legitimate No. 2 scoring option behind Luka Doncic after a surprise appearance in the Western Conference Finals.

If the interest in Gobert is real, the idea for general manager Nico Harrison and Co. has to be to find more low-post defense after some major struggles on that end of the court in Dallas’ conference finals loss to the Golden State Warriors. The Mavericks yielded an eye-opening 115.2 points per outing.

As for Gobert, there’s now a great chance that the Utah Jazz will look to trade him this summer. The All-Star center and his team just finished up shop on a disappointing first-round exit at the hands of these Mavericks in the 2022 NBA Playoffs. Quin Snyder has resigned. There’s a reported rift between Gobert and star teammate Donovan Mitchell. In short, he’s not long for Salt Lake.

Below, we look at two ideal Rudy Gobert trade scenarios that could bring the three-time NBA Defensive Player of the Year to Big D.

Rudy Gobert trade to the Dallas Mavericks in three-team deal

It’s not yet known whether Utah’s power duo of Justin Zanik and Danny Ainge in the front office would look to go into a full-scale rebuild after another disapppointing first-round exit. Who the Jazz decide on to be their next head coach will tell us the story here.

Let’s assume for a second that the goal is to build a more well-rounded roster behind star guard Donovan Mitchell. Getting a third team involved in Gobert trade talks with the Mavericks might have to be in the cards. That’s magnified due to his rather lofty salary.

To put this into perspective, the 30-year-old Gobert will be due $46.66 million in 2025-26. In short, the Jazz might have to add assets to the mix if they want to acquire legitimate talent for the star defender.

In this scenario, Utah picks up a backcourt running mate for Mitchell in Brogdon. The veteran has been darn good in recent years, averaging 18.9 points, 5.1 rebounds and 6.3 assists since the start of the 2019-20 campaign. The Jazz also add a replacement for Gobert in a young Myles Turner to the mix. While the 26-year-old big has not morphed into the star most envisioned years back, he’s a darn good player. The center is averaging 12.7 points and 2.7 blocks since the start of the 2018-19 season.

From Indiana’s perspective, it picks up three valuable future first-round picks as the team looks to build around the talented young backcourt duo of Tyrese Haliburton and Chris Duarte. That includes two future first-round selections from Utah. The cost of doing business here is taking on two expensive veteran contracts while adding a 2021 first-round pick in Josh Green to the mix.

In this scenario, Dallas would be able to roll with Doncic, Gobert, Jalen Brunson and Spencer Dinwiddie as its core four. While questionable in terms of scoring, it’s a much improved compared to a team that earned a spot in the NBA’s version of the Final 4 last season.

This would be both a cost-cutting move and a trade to build for the future in Utah. As mentioned above, Gobert is due a lot of cash moving forward. That includes north of $90 million over the final two years of his deal. In this hypothetical trade, Utah would actually save that $90 million starting in 2024-25 — giving it a ton of financial flexibility.

The Jazz also add two expiring contracts in that of Kleber and Powell that could actually be flipped or more draft assets during the 2022-23 season. In addition to this, they pick up the aforementioned Green and a first-round pick in 2022 as well as an unprotected 2025 first rounder.

Dallas might be impacting its depth big time by pulling off a deal of this ilk. That’s why the team demands a solid forward in Royce O’Neale in return. He’d be one of the first players off the bench, joining Spencer Dinwiddie in that role. The only question for Dallas is whether giving up those two first-rounders is worth it for an expensive Gobert.