The Atlanta Falcons released linebacker Barkevious Mingo on Saturday following his arrest in Texas on one charge of indecency with a child.

Mingo, 30, was arrested by Arlington police Thursday on one second-degree felony charge for sexual contact with a person under the age of 17. After being taken into custody, the veteran linebacker paid $25,000 bond and was released. A trial date has not been set.

The Falcons, who signed Mingo in March, released a statement on Saturday indicating they were looking into the matter further. On Saturday night, the franchise announced it terminated Mingo’s contract.

“After being made aware today of allegations involving Barkevious Mingo and gathering information on the matter, the Atlanta Falcons have terminated his contract.” 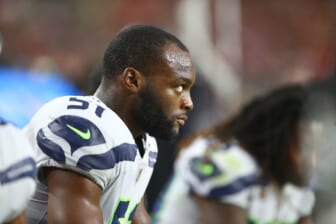 Mingo, the No. 6 pick in the 2013 NFL Draft, has bounced around the league since being drafted. Originally drafted by the Cleveland Browns, he was traded to the New England Patriotsin August 2016.

Lukas Garcia, who is representing the linebacker, called the allegations against his client “completely baseless” in a statement and claimed it is driven by money “or some other ulterior motive.”

If convicted, Mingo faces a maximum sentence of 20 years for committing indecency with a child.