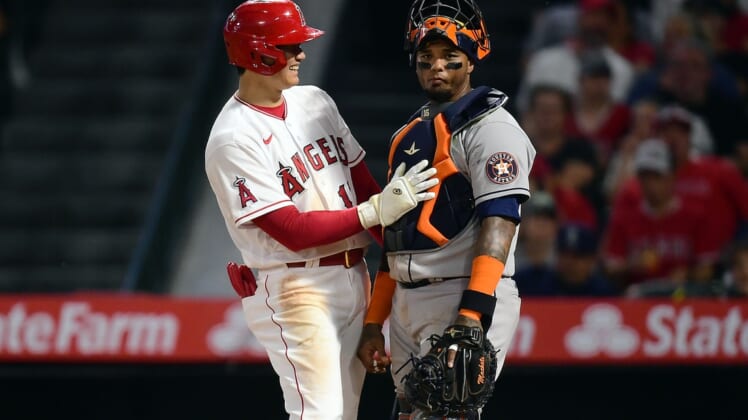 The Houston Astros erupted for eight runs in the seventh inning to break open a close game and beat the host Los Angeles Angels 13-6 Friday night in Anaheim, Calif.

The Astros had 14 hits in all, including six home runs.

Jose Altuve, Aledmys Diaz, Alex Bregman and Jeremy Pena each hit a solo home run. Kyle Tucker hit a three-run homer and then added a solo blast for Houston, which got contributions from the entire lineup.

The Angels scored a couple runs in the first inning against Astros starter Jake Odorizzi but didn’t score again until the game was out of reach. Jared Walsh had three hits for Los Angeles, but Mike Trout was 0-for-3 with two strikeouts.

The Astros took the lead in the top of the first inning when Altuve led off the game with his first homer of the year, hitting a 93-mph fastball on a 3-1 pitch from Angels starter Reid Detmers over the fence in left-center.

The Angels responded in their half of the first against Odorizzi with two runs to take a 2-1 lead. They missed a chance for more when Astros left fielder Michael Brantley threw out Walsh at home, who was trying to score from second on a single by Brandon Marsh, to end the inning.

Singles by Shohei Ohtani, Anthony Rendon and Walsh, and a passed ball by Astros catcher Martin Maldonado resulted in the two runs for the Angels.

The Astros scored single runs in the fourth, fifth and sixth innings before breaking the game open with eight runs in the seventh inning and a 12-2 lead.