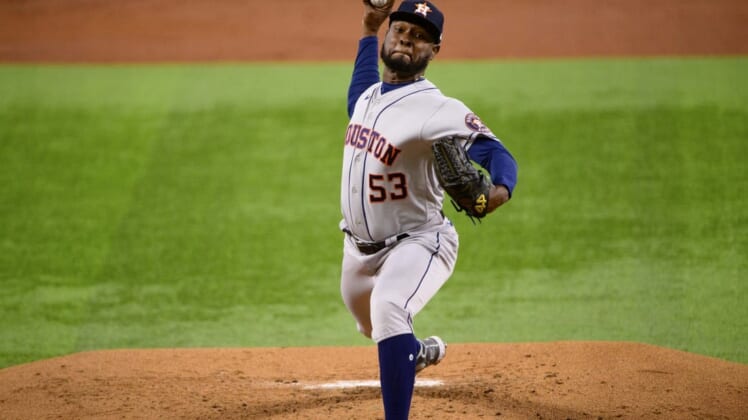 With their 2-1 victory over the Yankees on Thursday, the Houston Astros completed a nine-game stretch against the two juggernaut New York teams with a 7-2 mark.

The single game against the Yankees, which followed a road trip to the Big Apple, marked the opener of an eight-game homestand that continues against the Los Angeles Angels on Friday.

The Astros swept the Mets at home June 21-22, split a four-game series with the Yankees at Yankee Stadium, then swept another two-game road series against the Mets before returning home. Those respective series were ballyhooed, and before the Astros shifted their attention to the Angels, they allowed for a period of reflection on their quality performances against the New Yorkers.

The Yankees have the best record in baseball, and the tough Mets lead the National League East.

“The pitching was outstanding, our bullpen was very good. In the games that we lost up there, we didn’t have a fresh bullpen like we had (Thursday),” Astros manager Dusty Baker said.

“We played good during this time. We beat two very good teams and played them in a short period of time, and you usually don’t do that.”

Right-hander Cristian Javier (5-3, 2.73 ERA) has the starting assignment for the Astros on Friday. He worked the first seven innings of the Astros’ combined no-hitter against the Yankees last Saturday, issuing one walk while recording a career-high 13 strikeouts. Javier has made four relief appearances this season but is 5-3 with a 3.33 ERA in 10 starts with 64 strikeouts against 22 walks over 51 1/3 innings.

Right-hander Michael Lorenzen (6-5, 4.24 ERA) is the scheduled starter for the Angels in the opener. He has dropped back-to-back decisions and is 1-3 with a 6.75 ERA over his past four starts. Lorenzen has issued 13 walks in 20 innings in that span.

Lorenzen is 0-1 with a 7.20 ERA in three career appearances (one start) against the Astros. In his second career start with the Angels, he allowed four runs on four hits and two walks with two strikeouts over 3 1/3 innings in an 8-3 road loss to the Astros on April 18.

The Astros should consider themselves fortunate that they will miss Angels ace Shohei Ohtani during the series. After limiting the Chicago White Sox to five hits and one walk while recording 11 strikeouts over 5 2/3 scoreless innings in the Angels’ 4-1 victory Wednesday, Ohtani joined Nolan Ryan and John Lackey as the only Angels pitchers to record 30-plus strikeouts while not allowing an earned run over a three-start span.

Only three other pitchers have accomplished that feat over the last 10 years: Jacob deGrom, Clayton Kershaw and Chris Sale.

“Shohei, he’s incredible,” Angels second baseman Luis Rengifo said. “I like to watch how he’s pitching. I’m so happy for him.”