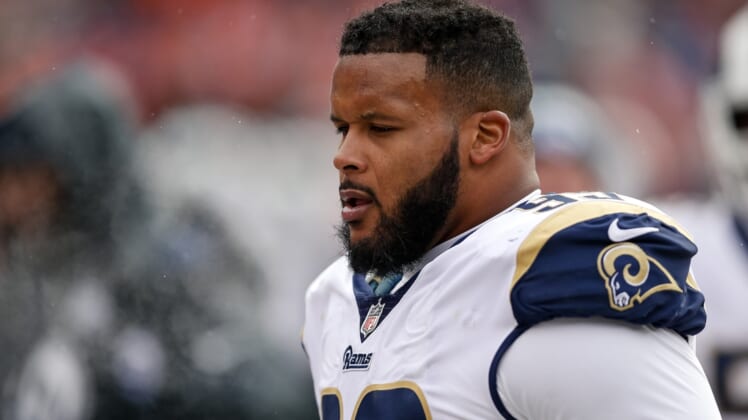 Assault charges were expected to be filed against All-Pro Los Angeles Rams defensive tackle Aaron Donald for an alleged incident that occurred in the early morning hours on Sunday, Pittsburgh’s KDKA Channel 2 reported.

Pittsburgh attorney Todd Hollis said he was filing charges against Donald on behalf of 26-year-old DeVincent Spriggs. Hollis claimed a physical altercation occurred “between 3-4 a.m. at an after-hours club on (Pittsburgh’s) South Side,” the report said.

Hollis provided a photograph to the television station showing Spriggs’ right eye swollen shut. According to a KDKA Radio report, the incident began after Spriggs “bumped into” Donald.

The Rams released a statement Wednesday.

“We are aware of the reports regarding Aaron Donald,” the statement said. “We are collecting more information and will have no further comment at this time.”

Hollis said that in addition to the eye injury that required 16 stitches, Spriggs suffered an arm injury, a concussion “and other severe injuries he’s suffered. This is a severe incident.”

The is no indication where Spriggs is from, with the reports saying he is “an out of towner.”

Donald was the 13th overall selection by the Rams out of Pittsburgh in the 2014 draft and has been selected to the Pro Bowl in all seven seasons he has played in the NFL. He has also been a first-team All-Pro six times.