Aaron Donald was allegedly involved in an incident that could bring about assault charges from a man identified as DeVincent Spriggs. 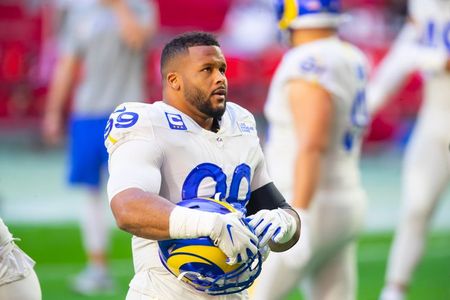 Los Angeles Rams superstar Aaron Donald was reportedly involved in an alleged assault between 3 and 4 a.m. this past weekend, and could face criminal charges as a result.

Investigative reporter Andy Sheehan of Pittsburgh’s KDKA-TV News CBS affiliate broke the news on Wednesday of Donald’s alleged assault, and featured an unsettling image of the man, identified as DeVincent Spriggs, who intends to press charges against Donald:

No further details on the alleged incident were available after KDKA-TV News’ initial report.

Donald has been named a first-team All-Pro defensive lineman six times during his NFL career. Due to his performance in the 2020 season, Donald won the league’s Defensive Player of the Year award for the third time. He had 45 combined tackles, 14 tackles for loss and 13.5 sacks, and forced four fumbles.

The Rams initially selected Donald 13th overall in the 2014 NFL Draft out of the University of Pittsburgh.

Donald, 29, has only missed two games over the course of seven NFL seasons.

If the alleged assault did occur, Donald would face significant disciplinary action and likely a suspension from the NFL. It’d be a first for Donald, who doesn’t have any notable history of off-field issues or legal problems.