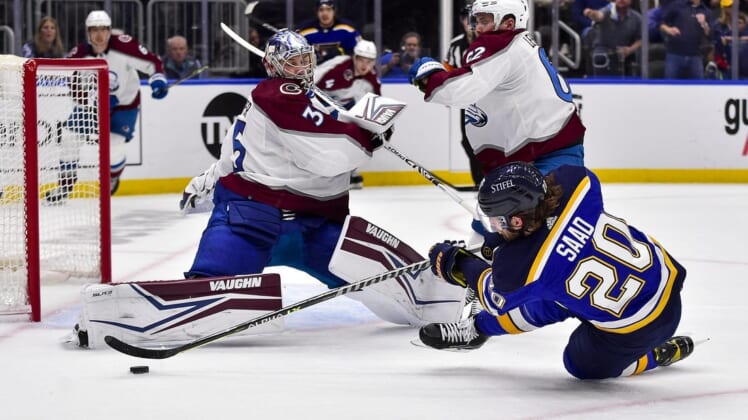 The Avalanche lead the series 2-1. Game 4 is Monday night in St. Louis.

Both teams suffered major casualties. Blues goaltender Jordan Binnington exited 6:45 into the game with a lower-body injury when Avalanche forward Nazem Kadri and Blues defenseman Calle Rosen crashed into him.

Earlier in the game, Colorado defenseman Samuel Girard was injured when Ivan Barbashev drove him into the end boards. He was taken to a local hospital for further evaluation of his upper-body injury.

Logan O’Connor, Gabriel Landeskog and Kadri also scored for the Avalanche, while Darcy Kuemper made 29 saves.

Ryan O’Reilly scored and set up Colton Parayko’s goal for the Blues.

The Blues struck first when O’Reilly won a faceoff and Parayko blasted a slap shot that deflected off the stick of defenseman Devon Toews and past Kuemper.

The Avalanche tied the game 1-1 midway through the first period moments after killing a penalty. Josh Manson came out of the penalty box to corral the puck and send O’Connor to score against Husso.

The Blues nearly scored a power-play goal to regain the lead in the second period, but O’Reilly’s shot deflected off Kuemper’s glove and caromed off the left post.

Then the Avalanche moved ahead 2-1 shortly after the expiration of a power play when Kadri redirected Cale Makar’s shot past Husso. Colorado made it 3-1 when Lehkonen scored off a rush up left wing.

The Blues cut the lead to 3-2 on O’Reilly’s rebound conversion of Nick Leddy’s point shot with 30 seconds left in the period.

The Avalanche caught Husso coming out of the net for an extra attacker to make it 4-2 with 2:08 left to play. With Husso backpedaling toward the vacated goal, Nathan MacKinnon found Landeskog open on left wing for the tally.

Lehkonen’s empty-net goal with 58 seconds left made it 5-2.