Armaan Franklin leads No. 16 Virginia’s rally over No. 5 Baylor 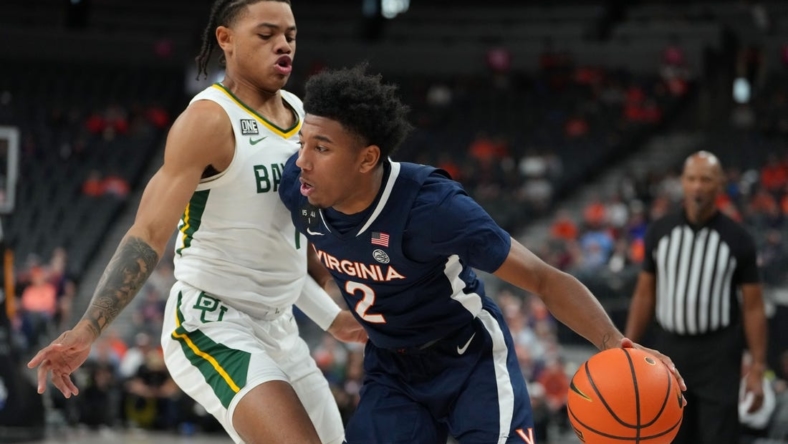 Armaan Franklin scored a career-high 26 points and spurred a decisive run over the first 10 minutes of the second half as No. 16 Virginia defeated No. 5 Baylor 86-79 on Friday in an opening round game in the Continental Tire Main Event in Las Vegas.

The Cavaliers (3-0) advanced to the winners’ bracket to play the winner of the second opening round game between No. 8 UCLA and No. 19 Illinois. The championship and consolation games will be played on Sunday afternoon.

Virginia trailed by three points at halftime but leapfrogged to the lead and took control of the game with 32-7 run over the first 10:22 of the second half. Baylor eventually got back to within six points on Dane Bonner’s putback layup with 1:04 remaining but would get no closer.

Kadin Shedrick hit for 17 points for the Cavaliers, with Ben Vander Plas hitting for 14 and Reece Beekman adding 10 points and 10 assists. Virginia was 8 of 12 from beyond the arc in the second half and shot 55.6 percent from the floor on the night.

The teams stood toe to toe in the first half, with four ties and two lead changes, the latest when Cryer canned a 3-pointer to put the Bears in top at 18-15 at the 8:24 mark. Baylor eventually forged a seven-point lead, its largest of the game, on George’s 3-pointer with 4:11 to play.

But the Cavaliers used their defense to get back in the game. Two free throws by Vander Plas after a steal by Franklin allowed Virginia to close to within 33-30 at the break.

Cryer led all scorers with 13 points before halftime as Baylor poured in seven 3-pointers over the first 20 minutes. Shedrick and Franklin paced the Cavaliers with eight points apiece; Virginia did the majority of its damage from close range, attempting only two shots from beyond the arc and making one of them.

Things completely changed in the second half as Virginia got hot from the outside and scored 24 of the half’s first 28 points to sweep to a 54-37 lead. Thirteen of the Cavaliers’ points over that stretch came from Franklin, including three 3-pointers.