Arizona State looks to shake off rust against Colorado 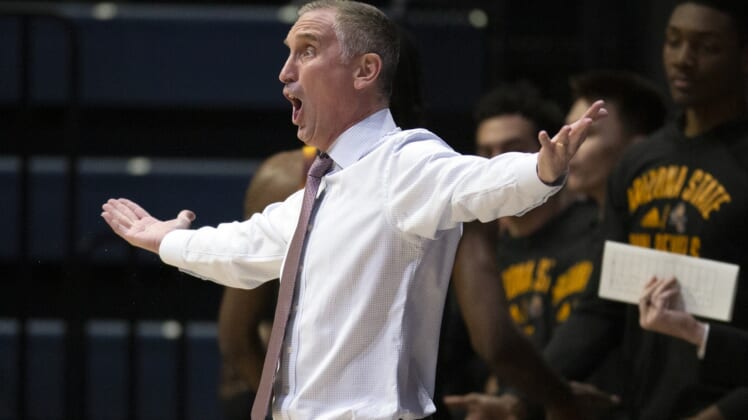 Arizona State is scheduled to play for only the second time in 27 days due to COVID-19 protocol when it hosts Colorado on Saturday.

Arizona State coach Bobby Hurley and his team have also experienced difficulty scheduling practices because he has joined his players in COVID-19 protocol.

“It’s been a rough stretch for sure,” Hurley said. “We had a substantial number of positives, including myself, which was a tough period of time. Had a couple of days where I was really not feeling well. This is my first experience with it. To get a taste with that, I would not recommend it.”

Hurley was isolated for 10 days before returning to practice Wednesday.

In regards to having his team make progress on the court, Hurley said, “It’s just been pretty tough to put it all together.”

The Buffaloes have managed to play three games in the last week after a stretch of not playing because of COVID-19 protocol between Dec. 18 and Jan. 6.

K.J. Simpson led Colorado with 17 points, 14 in the first half, against Arizona. He also had four assists, three rebounds and three steals. Evan Battey had nine points and seven rebounds.

Colorado shot a season-low 32.8 percent from the field, including 4-for-20 from 3-point range. The Wildcats shot 51 percent and outrebounded the Buffaloes, 44-33, including a 27-12 edge in the second half.

“I was really proud of our guys’ fight in the first half,” Colorado coach Tad Boyle said. “Once we settled in, our guys fought back. But in the second half, I did an awful job of coaching. We gave up too many layups and we got selfish on offense. That’s my fault.”

Kimani Lawrence and Marreon Jackson are the only Arizona State players to start every game this season.

Lawrence is averaging 11.1 points and while shooting 52.6 percent from the field while grabbing a team-high 7.8 rebounds per game.

Jackson is struggling from the field shooting 25.9 percent, including 20.0 percent from beyond the arc.