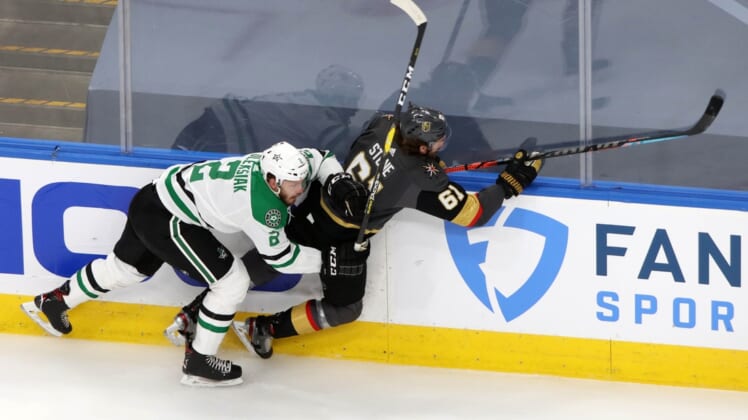 Off to the best start in the franchise’s four-year history, the West Division leading Vegas Golden Knights hit the road for the first time this season when they begin a back-to-back against the Arizona Coyotes on Friday night in Glendale, Ariz.

Vegas, behind two goals by defenseman Shea Theodore and three points from forward Alex Tuch, improved to 4-0 with a 5-2 victory over the Coyotes on Wednesday night in Las Vegas.

Mark Stone and Alex Pietrangelo each added a goal and an assist for the Golden Knights, who play 12 of their first 16 games at T-Mobile Arena. The 4-0 start surpassed a 3-0 start in their inaugural campaign in 2017-18 when they advanced all the way to the Stanley Cup Final.

“For sure, good to start with four big wins,” said Stone, who leads the team with seven points (two goals, five assists). “Now it’s just about getting better every day. There’s still more that we can do with our execution.”

“We talked during the offseason between the bubble and our training camp about getting off to a good start,” said Vegas coach Peter DeBoer. “The guys put in an awful lot of work, and I think this is the direct result of how hard they prepared for the season. They wanted to get off to a good start, and we did.”

Vegas now departs on a short two-game road trip to Arizona before returning for a stretch that features eight of 10 contests at home. Then it’s a neutral-ice game in Lake Tahoe against the Colorado Avalanche.

The Golden Knights held a meeting Thursday morning before departing for Arizona regarding COVID-19 protocols that was longer than any they’ve had so far this season. DeBoer said it wasn’t just to prepare for the team’s first road trip of the season but also because Arizona is currently a virus hot spot.

The Coyotes took three of a possible four points in a season-opening, back-to-back home series with San Jose before losing two straight to Vegas, and they play their next four games at home. After a Sunday afternoon contest with Vegas, they play a back-to-back with Anaheim starting Tuesday night.

The Coyotes, hampered by seven penalties, fell behind 2-0 on goals by Theodore and Pietrangelo in the first 8:33 on Wednesday and trailed 5-1 early in the third period before Phil Kessel scored his fourth goal of the season to end the scoring.

“Definitely a punch in the gut,” said coach Rick Tocchet. “It’s one of those games you’ve got to flush and bounce back on Friday. That’s the way it is now. We have to play really tight and not make bonehead mistakes. That’s really what it comes down to.”

“Tonight wasn’t good enough,” Brassard told NHL.com. “We all know that. Coaches don’t have to tell us — we know right now. … I’m expecting Friday we’re going to bounce back. That’s all.”