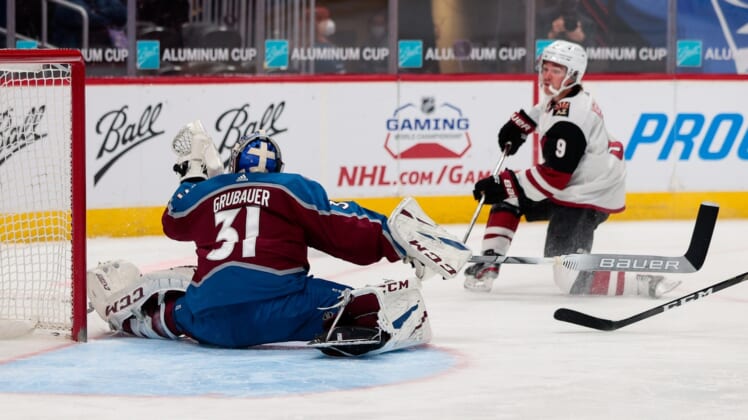 The best way to turn the page is to get back on the ice again, which is what the Arizona Coyotes will do Friday in a road game against the Anaheim Ducks.

The Coyotes were walloped 9-3 on the road against the Colorado Avalanche on Wednesday, giving up five first-period goals while seeing their momentum stunted at the same time. Arizona entered having won four of five, including a shootout victory against the Avalanche.

Just outside of the final playoff spot in the West Division, the Coyotes are doing their best to maintain a positive attitude, while considering Wednesday’s thrashing an aberration.

“It’s frustrating for everybody,” Coyotes head coach Rick Tocchet said. “When adversity hits, you’re looking for who’s standing up. That’s really what I’m looking for. Tough game. Obviously, we weren’t ready to play, everybody really had a bad game.

“In this sport, we’ve got to flush it down and be ready for Anaheim. That’s the way we’ve got to approach it right now.”

A positive for the Coyotes was a goal from Michael Bunting in his season debut, while on his first shift of the game. It was just his sixth career NHL game.

“To be honest, I went into today’s game with a nothing-to-lose attitude,” said Bunting, who also had an assist.

Bunting’s goal came 4:41 into the game, but the Avalanche already had scored twice by then. Less than three minutes later, Colorado had scored three more times for a 5-1 advantage. The Avalanche’s Joonas Donskoi already had completed a hat trick by the 7:31 mark.

Arizona now will settle in at Anaheim for two games in three days. The two-game set is less than two weeks after the teams split a pair of games at Anaheim, with the Ducks winning 3-2 in overtime on March 18 and the Coyotes leaving town after a 5-1 victory on March 20.

It has been a miserable season for the 11-victory Ducks, but they did win a pair of games against the fourth-place St. Louis Blues last weekend, which helped the Coyotes’ playoff chances.

But after a 3-2 overtime victory at St. Louis on Monday, the Ducks were unable to carry any momentum into a Monday matchup at Colorado and fell 5-2 to leave them 3-8-0 going back to March 10.

“You can’t look at the standings and the players’ names on the other teams; you’ve got to come out and compete, and compete hard,” Ducks head coach Dallas Eakins said. “I do think we did that at certain points, but at the end, the travel, the back-to-back, was too much for us against that group.”

The Ducks at least will have had three full days of rest before getting back at it Friday. They could use the help of leading scorer Rickard Rakell (seven goals, 15 assists), who came away from Sunday’s game with an upper-body injury and did not play Monday.

Anaheim could also use goaltender John Gibson, who has missed the past two games with an upper-body injury. Gibson practiced with the team this week.

“We’re going to take another baby step with him,” Eakins said. “He’s looking good. We didn’t think it was going to be anything long term with him.”