The Arizona Cardinals are off to a spectacular start. Unfortunately, one of their biggest offseason additions, J.J. Watt is now expected to miss the rest of the regular season.

Watt started all seven games at defensive end, racking up 16 tackles, a sack, and a forced fumble to go with two of his trademark pass deflections. With Watt set to miss extended time for a team well on its way to the playoffs, this is a big blow to one of the top defenses in the NFL.

Since they are among the elite teams in the NFL and don’t have much depth behind Watt, don’t be surprised if Cardinals’ general manager Steve Keim adds to this roster before the Nov. 2 trade deadline. Here are four pass-rushers who can help replace J.J. Watt for the Cards.

Losing J.J. Watt is a big blow. Playing 77% of his team’s snaps, Watt graded at 79.5 with Pro Football Focus. One player who may be able to step right into his shoes is Washington Football Team defensive lineman Matt Ioannidis.

A fifth-round pick in 2016, Ioannidis has tallied 22.5 sacks despite starting just 36 of the 63 games he’s played. In Washington, Ioannidis plays a rotational role as a backup on a young defensive line who likely won’t go anywhere any time soon. 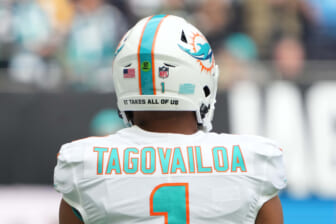 The WFT are also 2-5 in 2021 and Ioannidis has just one more year left on his contract. More importantly, Ioannidis has played well, grading at a nearly-identical 79.9 grade playing in just 56% of his team’s snaps. Displaying an ability to get after QBs, Ioannidis could replace Watt in the starring lineup likely without losing any pass-rush efficiency. It’s a move Steve Keim should look into.

One of the best defensive tackles in the past decade, Fletcher Cox has seemingly begun to slow down in recent seasons. Or it could be that the seven-time Pro Bowl lineman is simply sick of playing for a losing team, even expressing recent frustration aimed at defensive coordinator Jonathan Gannon.

Maybe it’s simply time for a chance of scenery for the All-Pro Super Bowl champ? The Cardinals have a clear need, and though it’s not at the exact position Cox typically plays, he can still help generate pressure. In 2020 Cox racked up 6.5 sacks and nine QB hits.

PFF may be Cox grading lower in 2020 (74.1) and 2021 (63.5) than he typically does, but he may be worth the gamble. The Cardinals spent the offseason loading up on stars, now that they have lost one in Watt, maybe Cox can be a worthy replacement. 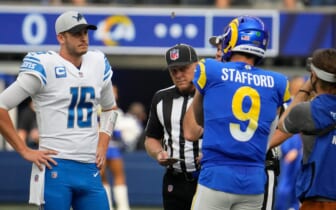 Also Read:
5 NFL quarterbacks who could be traded ahead of the deadline

Akiem Hicks heads to Arizona for a playoff run

Another team that appears to be headed for the bottom of the barrel in the NFC, the Chicago Bears have several aging defenders who could be on the move. Robert Quinn, Khalil Mack, and Akiem Hicks are all 30 or older and may want to seek an opportunity to play for an immediate playoff contender. All three can get after quarterbacks with the best of them.

Mack likely isn’t available. Quinn is having a great season, right behind Mack with 5.5 sacks, and is under contract through the 2024 season. Hicks, however is set to be an unrestricted free agent at the end of this year and may not be in the organization’s long-term plans.

Even though Hicks may not look like your prototypical defensive end, this big guy can create some havoc in the trenches. In 2020, Hicks tallied 29 pressures and 3.5 sacks for the Bears. In comparison, Watt matched the 29 pressures Hicks had playing for the Texans last season.

Trading for Hicks gives the Cardinals a proven one-year stopgap who has played at a Pro Bowl level in the past and he likely wouldn’t cost much in a trade.

Now, it’s also being reported Pittsburgh Steelers edge-rusher Melvin Ingram wants to be traded. Even better, the team reportedly would prefer to send the three-time Pro Bowl sack-artist to an NFC team, having already turned down inquiries from the Kansas City Chiefs.

More of your typical edge-rusher, Ingram has struggled to stay on the field since his last Pro Bowl season in 2019. However Ingram seems healthy this year, and has gotten back into the sack column. If he truly wants to leave Pittsburgh and if the team strongly prefers to deal him to the NFC, the Cardinals could be a perfect fit.

Whether it’s Ioannidis, Cox, Hicks, Ingram or someone else, expect the Cardinals to add to their defensive line before the Nov. 2 trade deadline now that J.J. Watt is set to miss several weeks of action.