Although Melvin Ingram took his time, waiting to sign with a team until mid-July, the three-time Pro Bowl pass-rusher already wants a trade away from the Pittsburgh Steelers. While the Steelers haven't had the type of season Ingram may have imagined when he latched on, his reported reasoning is due to a recent lack of playing time.

To that end, Ingram has a point. In Week 3, Ingram played all 47 of the team's defensive snaps against the Cincinnati Bengals. The following week, his time was cut in half, seeing action in just 49% of the teams plays. This past week against the Seattle Seahawks was a new low, playing just 17 snaps, or 26% of the Steelers' defensive plays.

Ingram has compiled 50 sacks in his 10-year career. Although the 32-year old has dealt with injuries the past two seasons, causing him to miss nine games last year and three more in 2019, Ingram appears to be 100% during his time in Pittsburgh, playing for Mike Tomlin.

Pro Football Focus has Ingram grading at 73.6, which supports the idea that Ingram can still play at a high level. Despite his diminishing playing time, Ingram has one sack, two TFLs and six QB hits in 2021. 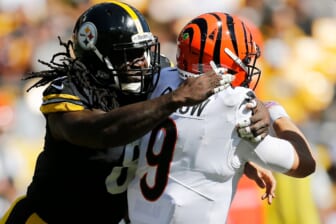 Should the Steelers find more motivation to deal the talented veteran, you can be sure there will plenty of suitors lining up for his services. The Kansas City Chiefs reportedly already reached out, but were turned down. Ideally, the Steelers want to send their offseason signee to an NFC team, which is another indicator that they believe he still has several great plays left in the tank.