What happened to the Seattle Seahawks’ plan to make Russell Wilson the highest paid quarterback in the NFL?

Currently, Wilson sits near the bottom of the pile for his overall contract amount and his average annual pay (far right columns, respectively) as we can see by Spotrac’s NFL quarterback salary chart. 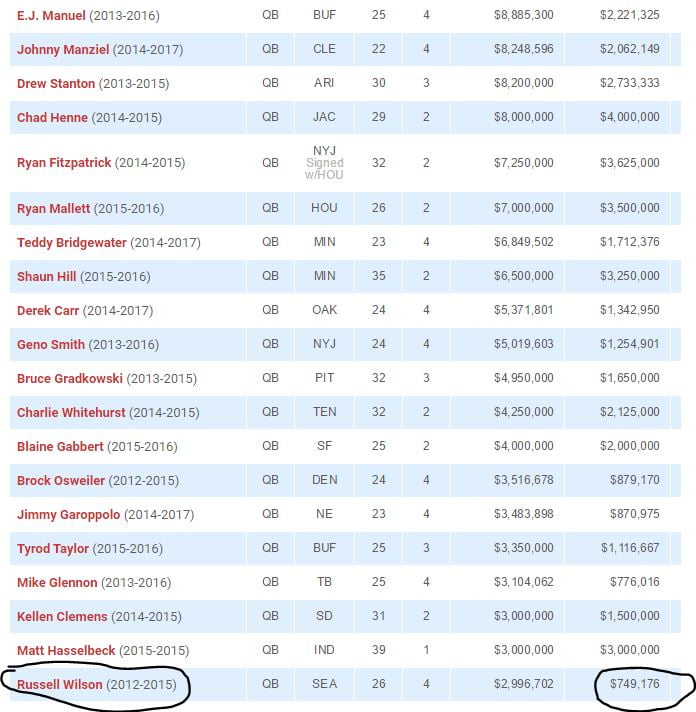 The low salary figure is a result of Wilson being a third-round draft pick, but his expiring deal creates a dilemma in Seattle, since the dual-threat quarterback is worth many millions more.

Every negotiation is unique in and of itself and this is no different. Ultimate team sport, he’s our quarterback, we’d love him to be our quarterback. But the thing is, we need to keep as many of these guys together as we possibly can.

When we got here (back in 2010) we had to make some very tough cap decisions with Cory Redding and Nate Burleson. They were two guys that we had a lot of respect for, but where we were on our cap at the time, we had to make decisions. And then we had a couple years without a cap and now we’re back in a world with a salary cap and we need to be cognizant of that.

It would be absurd for the Seahawks to not pursue take care of their severely underpaid quarterback. For now, however, Wilson is entering the last year of his rookie contract, and the team could choose to use a very expensive franchise tag on him for 2016.

Wilson appears to be patient in the process, but just how patient will he remain if he helps lead the Seahawks to a third consecutive Super Bowl appearance? Part of the team’s success can be attributed to Wilson’s salary affording Seattle an opportunity to acquire high-profile players. That won’t last much longer.

Wilson’s contract negotiations should be one of the season’s main storylines. If the Seahawks don’t, rest assured somebody will offer him a sizable pay day. He could always take a look at Major League Baseball, too.