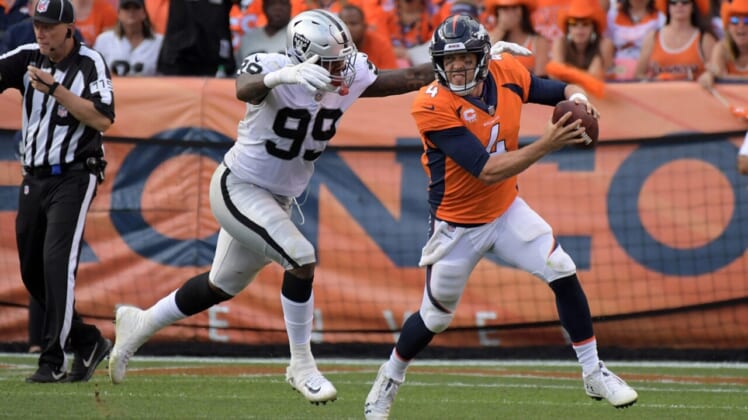 When the then-Oakland Raiders drafted Arden Key, his success was not guaranteed and his journey thus far has been a mixed bag. But 2020 feels different and the three-year pro appears ready to take the next step as he turns heads at Raiders training camp.

For all players coming out of the college ranks looking to make it in the NFL, optimism is aways high but reality often means their time in the league is short or fails to materialize at all. The Arden Key NFL journey has so far been disappointing but the young defensive end seems poised to finally realize his potential as he impresses at Raiders training camp.

Not only is Arden Key supremely more confident in 2020, his general manager Mike Mayock senses something different from him.

“At the end of the day, he’s a talented young man and I think this offseason was different for him,” Mayock said this week. “Even though we weren’t in the building, I sensed a different Arden Key. I think his commitment to the organization, and even more importantly, the commitment to his talent he had himself, those were both evident and I think they’re showing up right now.”

Earlier in camp, Key made a strong statement when he spoke with The Athletic’s Tashan Reed. In the interview, it was clear Arden Key was thinking differently, playing differently, and had found his true north.

“That’s the thing that I changed: I came in with problems coming out of college and I let that affect me when it came to trying to walk a straight line and trying to do everything that was asked of me,” Key told The Athletic. “No, I’m not doing that no more. The sky is the limit for me. I’m tired of these limitations and I’m not listening to them no more. I’m doing it the Arden Key way.”

He’s more physical andhe’s maintained his weight at 240 pounds and he says he’s focused on finishing – which has been a problem for EDGE rusher. He’s been far more aggressive during Raiders training camp despite playing with an injured hand that is heavily wrapped. He’s playing differently.

“Oh yeah, definitely. I feel a lot stronger, my weight’s where it needs to be right now. It’s just been different all throughout,” Key said this week. “The speed of the game has slowed down. I know the defense, so I can play fast and just go.”

The addition of defensive line legend Rod Marinelli to the Raiders coaching staff has also been a God-send for Key. The no-nonsense, tough-love approach of Marinelli has endeared him to his big lineman and Key is no different.

“He’s coached a lot of Hall of Fame guys, and a lot of guys soon to be in the Hall of Fame,” Key said of Marinelli. “And his track record speaks for itself and I feel like the whole d-line has bought in, and you don’t really have a choice but to buy in with a guy like Coach Rod Marinelli because you know you’re going to get better and you know you’re going to get pushed.”

The Arden Key NFL journey will be judged by what the player does on the field, not the words he speaks off it. And even though Raiders training camp practices are just that, practices, Key’s work ethic and newfound maturity are all a very good sign. If the Raiders can get some more sacks, more consistent play, and the Arden Key we’re seeing in camp during the season, it could be huge for this defense.

“I really like Arden Key right now and he’s doing it all with a club on his hand,” Mayock said.

Like so many young players, Arden Key is facing one of those years that could make is career, or it could mean he finds himself leaving Las Vegas in 2021.

If we believe what Key says, he could be calling Nevada home indefinitely.